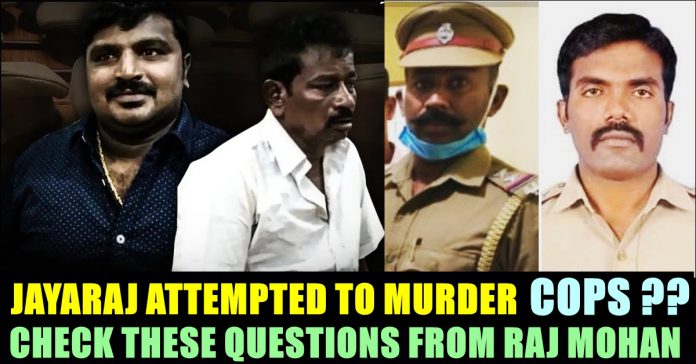 “How many police officers got treatment after getting harmed by Police officials ?? In which hospital they got treated ?? Which doctor gave treatment to them ?? Where is the medical record for the treatment given to them ??” asked Raj Mohan to Police officials who alleged that 59 year old Jayaraj, owner of a cell phone shop attempted to murder cops.

Earlier this week, Social activist, youtuber and actor Raj Mohan released a video regarding the complaint letter of Bennix’s mother to the authorities through which she narrated the details on the confrontation between her husband, son and the police officers of Sathankulam. Now, Raj mohan released another video, stating the allegations of police officers against the victims and asked few questions regarding that.

“It has been said that 59 year old Jayaraj, along with his son, attempted to murder cops. If that is the case, how many police officers got treated in which hospital and by which doctor ??” asked Raj mohan who also asked them to produce medical record. He further questioned the officials who alleged that Bennix and Jayaraj died of falling down.

“If a man falls down and injures himself, his front and rear side will get torn and die of bleeding ? Don’t you have something called as conscience ? They have plucked hairs from his chest to torture him. The police officers who are responsible for such activities are affected psychologically. Is a transfer and suspension is enough for such psychopaths ??” asked Raj mohan.

The reporter further informs that 50-60 lockup deaths are taking place in our country every year. “In 2017, 100 people died in lock up, according to National Crime Registration Bureau” he stated. He further went on to say the history of the officers who got involved in the crime. “8 cases against one of the sub-inspector is pending in the human rights commission. Another sub-inspector got transferred several times and was accused of torturing a victim in Whatsapp. He is even helped criminals who were involved in illegal Sand mining. He got transferred to Sathankulam station due to such crimes. A transfer is enough for such a serial offender ?” asked Raj Mohan.

“A neighbour shop owner has stated that one of the police officer asked for a phone in EMI to Bennix and he denied to give, thinking that it is hard to collect EMI from them monthly” Raj Mohan can be seen saying in his video. Rajmohan also insisted on fixing CCTV cameras in police stations and asked to people to start a movement like MeToo to expose the cruel behaviours of police officers across the state.

Watch the video he shared below :

To let people know about their basic rights and informations about social activists and retired police officials, lawyers, youtubers, Raj Mohan said that he is working on a web site and asked people to make use of it through the video.

Chief minister Edappadi K Palaniswami who addressed the press earlier regarding the state's situation in combating COVID 19, has posted a tweet warning miscreants...