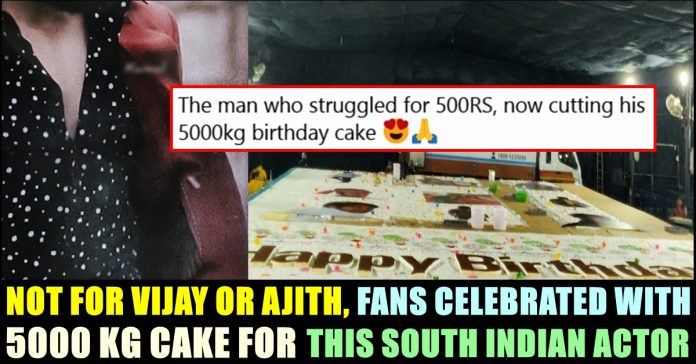 Actors with highest fan base in South India are Rajinikanth, Vijay, Ajith, Mahesh Babu and Pawan Kalyan. None of these actors fans celebrated their idol’s birthday with a cake which weighs 5000 kilogram. Actor Yash who belongs to Kannada film industry celebrated his 34th birthday today with his fans who made a 5000 kg cake.

This birthday is extra special for Yash as he is joined by his newborn son. His actress-wife Radhika Pandit and daughter Ayra took over Yash’s Instagram profile and posted a baking video. While Radhika is baking a cake, she had her beloved daughter as her sous chef.

Over 20,000 fans from across the country joined the birthday celebration of the Kannada actor to witness the biggest cake. The Nandi Links Ground in Nayandahalli in Bengaluru was lit up since days and workers were building up a 216 feet poster cut out of the actor. Fans also created a huge cake that weighed above 5000 kilograms. Workers and fans alike worked on the cake for more than 50 hours which is one of its kind. As fans swarmed up the place, there were over ten shuttle buses arranged for the fans to travel to the venue.

Watch the video below to witness the making of the cake :

This grabbed the attention of the netizens who are reacting to it with an awe. Check out some of their comments :

Less Than 2 Hours To Go For The Biggest Celebrations

A New Record Has Been Set By @TheNameIsYash Fans In Karnataka State.. 🔥🔥