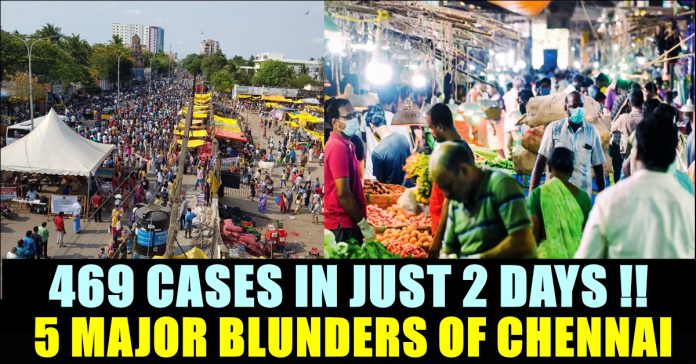 Tamilnadu have registered 3550 confirmed cases of Coronavirus so far. Among the total cases, 1754 reported from Chennai city. The capital of the state has reported 203 positive cases of COVID 19 on Sunday and 266 positive cases on Monday. The deadly virus has killed more than two and half people across the world and the government of India has decided to extend the lockdown for the third consecutive time to avoid it spreading.

This sudden increase in the positive cases in Chennai has led the government not to apply relaxation to the city which is being applied in other districts. Tamilnadu government has announced that wine shops will be opened from 7th of May in orange zones and said that the wine shops in Chennai would remain closed as it is a Red zone.

Now, let us look at some of the major blunders committed by the authorities and by the people of the city which caused the damage :

The popular Koyambedu market shifted to Thirumazhisai only on Monday by the market management committee despite pictures and videos of people thronging in it are doing rounds in social media and television media for several days since the lockdown. Experts believe that the damage could have been reduced if this decision made by the market management committee came in to effect earlier. Thiruvanmiyur market divided into two or three to avoid people crowding but authorities failed to do the same with Koyambedu market. The mofussil bus terminus and the metro stations could have been used as a space for different vendors to avoid people accumulating in one place. Failure of such measures caused the spread of the virus. Retired IAS officer Devasahayam has said that the sudden announcement of the central government made people to rush towards the market for essentials.

Not Providing PPE’s for health workers :

Personal protective equipment (PPE) such as masks and gloves were not issued to ground level health workers and conservancy workers despite of several requests made by the employees associations of The Greater Chennai corporation. As a result of this, an assistant engineer of the corporation who was working in containment zones in Thiruvottiyur has tested positive for the coronavirus. Even police officers who are working on the frontline hospitals which are receiving suspected COVID-19 cases were also not given PPE’s.

The Tamilnadu government has implemented a lockdown with in lockdown for Chennai, Coimbatore and Erode. The state government advised people to stay within their houses from April 26 to 29 which forced the public to rush towards Koyambedu market to buy stocks for four days. As local grocery shops ran out of essentials, many people rushed towards the markets across the city without following the norms of social distancing to buy stocks. However, authorities later announced that the grocery shops would function in the four days. But it was too late. This announcement by the state government got heavily criticized by residents as it caused only panic and more positive cases.

Volunteers who are employed to provide essentials in the containment zones were not tested thoroughly. Time of India reports that the civic body did not test them before employing them. A corporation official has reportedly said that due to a volunteer who provided his service in Triplicane, infected 40 people in a single street in that area. Special officer J Radhakrishnan has said that volunteers would be tested, after this incident.

No Appropriate Information About Containment Zones :

The Greater Chennai corporation continues to fail in educating people about their vicinity. As the disease is spreading in large number day by day, the corporation officials are not creating awareness about the infected areas. The details on containment zones were released by the government to the public only a week ago. During initial period, a news about an employee in Velachery mall testing positive for the virus was published by the officials through posters, television and other media platforms to create awareness but no other positive cases in any other area got such attention. Due to lack of awareness, health workers of corporation are fearing to get contact with infected people as they are conducting surveys door to door. Retired IAS officer Devasahayam has said that the government authorities should have educated the public about it but failed to do so.

Previous articleActress Replied To Vijay Fan Who Posted Insensitive Tweet About Her !!
Next articleVijay Sethupathi Wants Vaccine For This Disease !!

Did The Photos Of Hansika Leaked ?? Actress Shocked & Took The Matter To Social Media !!

Mia Khalifa, former po*nographic star and popular media personality, responded to a girl who shared her story about being subjected to severe harassment from...