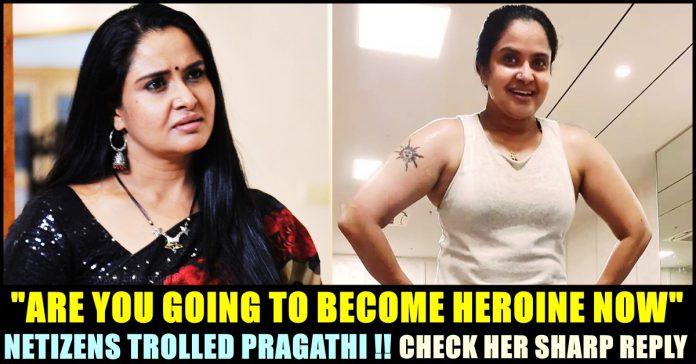 For uploading a work out video of her in her official Instagram space, trolls attacked South Indian actress Pragathi, questioning she is working out hard and on whether she is going to get heroine roles in films. Without turning a blind eye to the trolls, the actress came up with sharp replies to teach the negative commenters a lesson and to shut them down once and for all. The actress said that she is doing to keep her healthy and not to get movie opportunities and even asked one of the abusers to get out of her Instagram space.

Veteran actress Pragathi got introduced to Tamil industry film through Bhagyaraj’s 1994 film “Veetla Viseshanga” as a heroine. After her debut, the actress went on act in several movies in Tamil, Telugu and Malayalam languages. Some of her notable works in Tamil film industry are “Periya Marudhu” with Vijayakanth, “Summa Irunga Machan” with Pandiyarajan. In recent days, she has been playing the roles of protagonist’s mother. Udhayanithi’s “Geththu”, Sasi Kumar’s “Thaarai Thappattai”, Santhanam’s “Inimey Ippadithaan” are some of her recent works.

She is pretty much active in social media platforms nowadays and has been uploading the videos of herself working out and motivating her followers. With nearly 3 lakh followers, Pragathi’s recreation for “Vaathi coming” with her son went viral and made headlines during the song’s release. On Monday, she came up with a work out video of herself taking pushups on a treadmill in her official Instagram handle.

“Sometimes you just have to burn the bridge and learn to swim… OT all worksout trust yourself” read the caption of her video in which she could be seen shedding sweat. Check out her post below :

The post garnered huge reach and along with the enormous number of positive reactions, few spewed hatred at the 45 year old actress. A user asked why she is not losing weight, despite of the heavy work out she is going through. Replying to him/her, Pragathi said “I am not working out to lose weight, I want to be strong, healthy and flexible”

“Why are you even doing these aunty ? You are not going to get heroine role by doing these, If you had did these earlier, you would have become a star like Sri devi” said an Instagram user named “Snipe snapesip”. Replying to him, Pragathi said “I am not doing these to become heroine or for the sake of my age, it is for my health and passion”

However, the follower didn’t end there as he came up with another reply asking Pragathi not to show “feminist” attitude. “Where did “feminist attitude come in this issue ? Why don’t you get out of my list or I will have to block you. I don’t want such useless negative people writing on my wall. Just get the hell out of my wall” Pragathi replied.

Previous articleChinmayi Replied To Those Who Trolled Her On Vairamuthu’s Birthday !!
Next articleMohan G Reacted To The Trailer Of Pa. Ranjith’s “Sarpatta Parambarai”