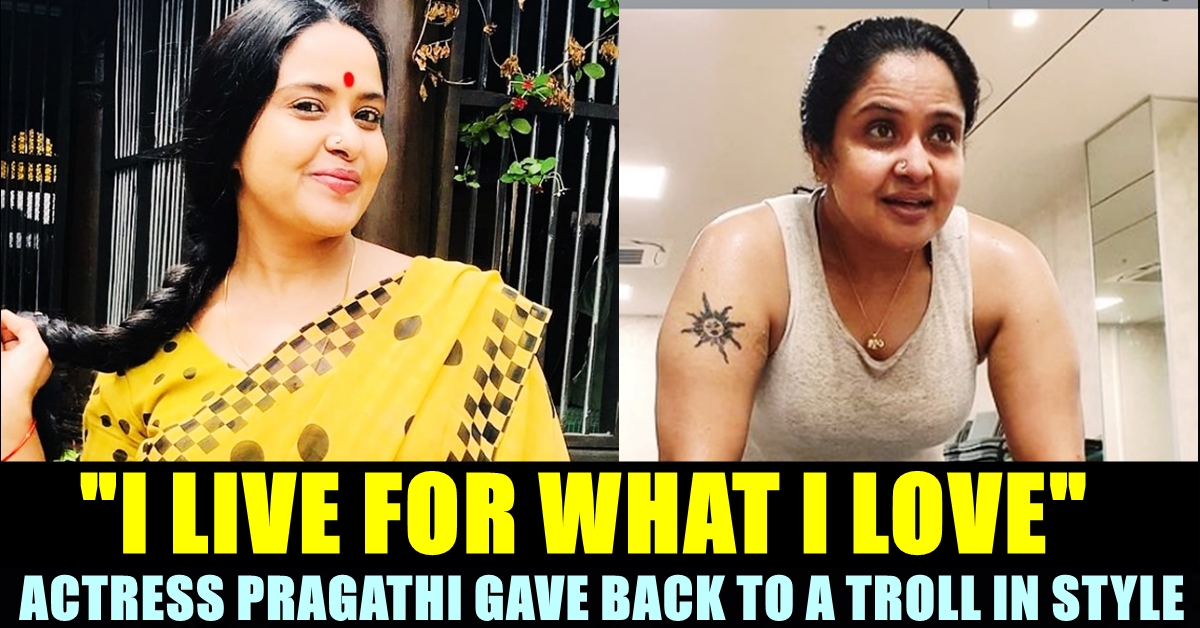 Popular actress Pragathi who is pretty much active in social media platforms nowadays, has been uploading the videos of herself working out and motivating her followers. For one of her most recent posts, a follower dropped a comment asking whether she is going to enroll her name in a “Wrestling” competition to troll her. Replying to him, the senior actress said that physical fitness is her passion to make him shut down once and for all.

Veteran actress Pragathi got introduced to Tamil industry through Bhagyaraj’s 1994 film “Veetla Viseshanga” as heroine. After her debut, the actress went on act in several movies in Tamil, Telugu and Malayalam languages. Some of her notable works in Tamil film industry are Periya Marudhu with Vijayakanth, Summa Irunga Machan with Pandiyarajan. She also acted as protagonist’s mother in Udhayanithi’s Geththu, Sasi Kumar’s Thaarai Thappattai, Santhanam’s Inimey Ippadithaan etc.

Most recently, she was busy acting in a serial named “Aranmanai Kili” as a character artist which was telecasted in Vijay Television. She is also busy engaging her 2 lakh plus followers by posting motivational posts in Instagram.

On Tuesday, Pragathi came up with a slow motion video of herself working out and wrote a comment saying “Iam a result of my mistakes, my choices, my discipline, My passion, my madness”

On seeing the video, a follower dropped a comment in Telugu trolling the actress posts related to fitness. He said “Why are you suffering ?? Are you going to enroll your name in any “Wrestling” competition ?”

His comment grabbed the attention of the actress who replied saying “Demotivating people by posting negative comments is your passion, My passion is physical fitness. I love to live for what I love not others like…” the reply comment of the actress read.

Months ago, the actress grabbed headlines after one of a video she uploaded in her official Instagram account went extremely viral across the social media platforms as she performed for Thalapthy Vijay’s Vaathi Coming along with her son Manish in that video.