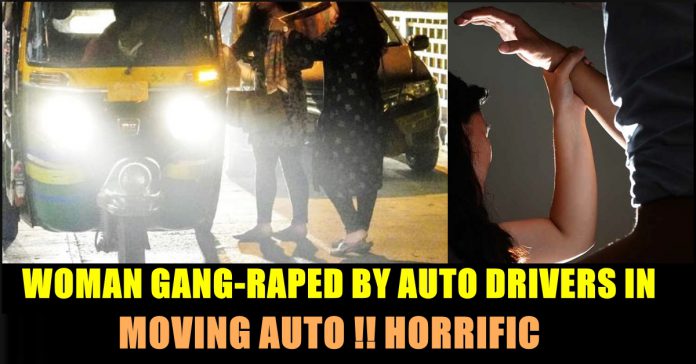 A 42-year-old woman was allegedly gang-raped by five men on Saturday, first in a house in Gurugram’s Bhangrola village and then in a moving auto-rickshaw on NH-8.

The victim, a Delhi resident, had gone to Gurugram to settle a financial dispute with a firm her husband was employed with before his death in 2013, reported Times of India.

She boarded an auto-rickshaw from Nakhrola Chowk on NH-8 at around 2.30pm. But instead of taking her to her destination IMT-Manesar, the driver Ankit took her to a room at Bhangrola where he and three of his friends took turns to rape her.

In her complaint to the police, the survivor claimed that she was abducted by an auto-rickshaw driver from Gurugram’s Nakhrola Chowk on NH-8 around 2.30 pm. A resident of Delhi, the woman had gone to Manesar to settle a financial dispute with a firm her husband who died in 2013 was employed with. Instead of taking her to IMT-Manesar, the autorickshaw driver took her to a house in Gurugram’s Bhangrola village where three of his friends were waiting for them. While confining her to the house, the four men took turns to rape her, reported News18.

In fact, the woman also told police officials that the accused then handed her over to two other men who were also autorickshaw drivers by profession. The two men then gang-raped her in a moving auto-rickshaw near NH-8 before dumping her at a food stall near the Rampura flyover. The passerby then took her to a hospital where she was treated following which she filed an official complaint with the Gurugram police.

Based on her complaint, police arrested the auto-rickshaw driver who abducted her in the first place, Ankit and his accomplices Deepak, Mahipal, Ajit and Sunnu on Sunday. A search has also been initiated to identify and nab the other two accused who gang-raped the woman in the moving autorickshaw and dumped her body. A medical examination of the woman confirmed sexual assault.