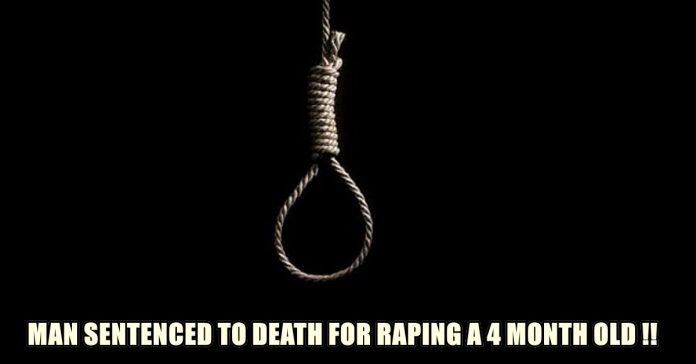 The district court in Indore, Madhya Pradesh has sentenced to death, a man convicted of rape and murder of a 4 month old girl.

The man identified as Naveen Gadke, is the uncle of the infant whom he brutally abused and then murdered. On 21 April, the Madhya Pradesh Police arrested Sunil Bheel (21) after they recovered the blood-soaked body of the infant from the basement of a commercial building in Rajwada area, NDTV reported.

The police identified Bheel and said CCTV footage showed him carrying the infant over his shoulder before the incident. The post-mortem, carried out at the state-run MY Hospital, suggested the victim might have been raped before she was killed as her private parts bore an injury mark, a source said. HC Mishra, Deputy Inspector-General of police, said that the victim’s family didn’t name Bheel as he is the victim’s uncle. “Suspects were ruled out by special investigation team (SIT) and the victim’s uncle was arrested. The accused had an argument with victim’s mother after which he committed the crime”, he told ANI. The government has drawn criticism for doing little to prevent crimes against women and children in the country. Two days after the crime in Indore, the Centre promulgated  an ordinance to allow death penalty for convicts of rape of girls below 12 years of age.

Previous articleYashika’s Opinion On “Girls Loosing Virginity” !! : OMG !! SHOCKING From The Actress !!
Next articleYewkk !! : Man Masturbates In Public Bus And Smiles At Camera : Girls In The Bus Seriously Offended !!

This Man Donated 11 Lakhs For The Pulwama Martyrs Families By Doing This !! RESPECT !!

Entire nation is grieving the loss of 40+ soldiers who were martyred in a terror attack in Pulwama, Kashmir yesterday. While every Indian is...