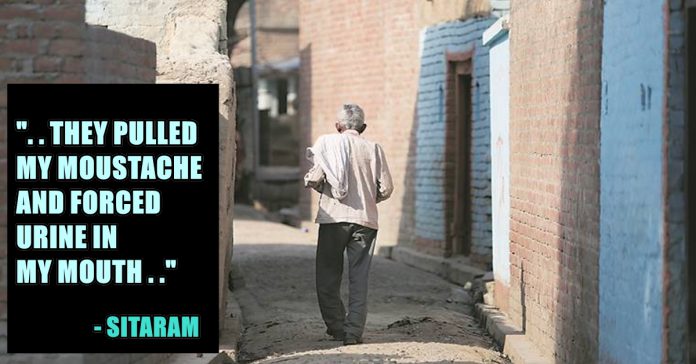 4 Men Tortured UP Dalit Man To Drink Urine And Assaulted Him Very Badly : SHOCKING To Know The Reason !!

A Dalit man from Uttar Pradesh’s Badaun was allegedly beaten up and forced to drink urine as he refused some “upper caste” farmers to harvest their crops. As The Indian Express reports, the incident took place on April 23 and Sitaram. Four brothers accused of beating a Dalit man in Hazratpur of Uttar Pradesh’s Badaun district and allegedly forcing him to drink urine after he refused to harvest their wheat crop late last month, were arrested from their village early Tuesday, police said.

The complainant, 43-year-old Sita Ram, said the incident happened after he refused to harvest their crop in Azampur Bisauliya village. The incident allegedly happened on April 23, but an FIR was registered only on Saturday. On the fateful day, Sitaram went to his family’s 10-bigha land to harvest crops. At around 5 pm, Vijay Singh, Pinku Singh, Shailendra Singh and Vikram Singh — Thakurs from the village, asked Sitaram to first harvest the crop in their 20-bigha land. Sitaram refused, saying he was unwell.

When contacted, Sita Ram said, “Vijay Singh wanted me to harvest his field. He didn’t want to do it himself because the weather was bad. When I refused, they started beating me… They also pulled my moustache and forced urine in my mouth,” said Ram. Jaimala Sitaram’s wife claimed that the four people kept saying “…inka hai kaun, sarkar humari hai (whose backing do they have, the government is ours).”

On alerting the police, they came and dispersed the four Thakurs. Sitaram’s family was assaulted again during the night and the police were again called. This time they booked both Sitaram and Vijay Singh under Section 151 CrPC (arrest to prevent the commission of cognizable offences). Sitaram was released the next day. The Dalit man wife’s initial call to the police about the assault went in vain as they failed to take any action. She never gave up and complained with the Dial 100 police emergency service to save her husband.

IG, Bareilly Range, Dhruv Kant Thakur met the victim in his house on Monday and instructed Badaun SSP Ashok Kumar to take action in the case. Earlier on Monday, senior superintendent of police of Badaun, Ashok Kumar, ordered the suspension of inspector Rajesh Kumar of Hazratpur police station for dereliction of duty and ordered a departmental inquiry against him after he refused to register the victim’s complaint on April 23, the day he was abused. A complaint was eventually registered on Sunday.
Previous articleTea, Coffee Vendor Fined 1 Lakh By The Railways For Doing This Crime Which Caught On Camera : SHOCKING !!
Next articleInstead Having At Least Two Monsoons A Year Why Dharmapuri Always Seems As “Drought-Prone”??