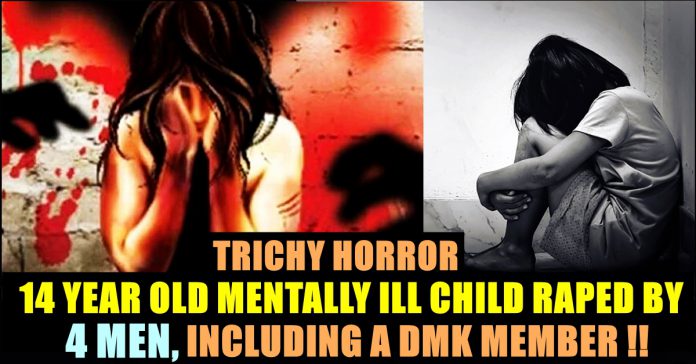 Rape is the fourth most common crime against women in India. According to the National Crime Records Bureau 2013 annual report, 24,923 rape cases were reported across India in 2012. Out of these, 24,470 were committed by someone known to the victim.

In this horrific case that took place in Trichy, a 14 year old teen girl who is mentally unstable raped by her grandfather’s friends. Four-member gang which includes a DMK functionary, raped the minor for 7 long months and made her pregnant which created a huge outrage.

The four men were arrested between August 29 and 31 following a complaint on August 28 but the crime to light only on Tuesday after the All Women Police started grilling the teenager’s relatives. The victim whose father is no more, living with her mother who is a daily labor along with her grandfather.

Going by the report of Hindustan Times, Police said the girl is now 4 month pregnant and a team of Trichy Government Hospital doctors are monitoring her condition with the assistance of District Children Protection Unit.

All the four accused are in their late 40’s which shook the social media. “The accused are P Selvaraj (49), T Selvaraj(51), Muthu(57), and Ramaraj (45). P Selvaraj had served as Peramangalam Village Panchayat President, twice. He is also the DMK’s Trichy district farmer’s wing’s deputy organizer. T Selvaraj was running a tea shop, and Muthu had worked as milk vendor. Ramaraj is working as an assistant at a fuel station,” said an inquiry officer with the Jeyapuram Police Station, who did not want to be identified as he is not authorized to speak to media.

“As her mother goes to work daily, the minor girl was under the care of her grandfather. The accused who are known to her grandfather, have raped her for nearly seven months. Her plight came to light only after her mother learnt of her daughter’s pregnancy,” said the police officer.

“After confirming her pregnancy, the doctors directed the case to police and Trichy district child protection unit. During the inquiry, the girl narrated the horror which she went through for nearly seven months,” the officer said.

P Vijayalakshmi, Inspector of Police, All Women Police Station, Jeeyapuram Trichy, said the accused were arrested under the Protection of Children from Sexual Offences (POCSO) Act and a court had sent them to police custody for further investigations.

“Since the case involves a minor girl, we cannot disclose more details. We have booked cases against the four accused, and investigation is ongoing,” Vijayalakshmi said.

Police have also started questioning the teenager’s relatives and neighbours s part of the investigation. R Lalvena, Member Secretary, Tamil Nadu State Commission for Protection of Children Rights said the state government would take all steps to protect her.

This is indeed heartbreaking and it seems no other way to prevent minors unless the individual who thinks of committing such crime, makes change in his self.