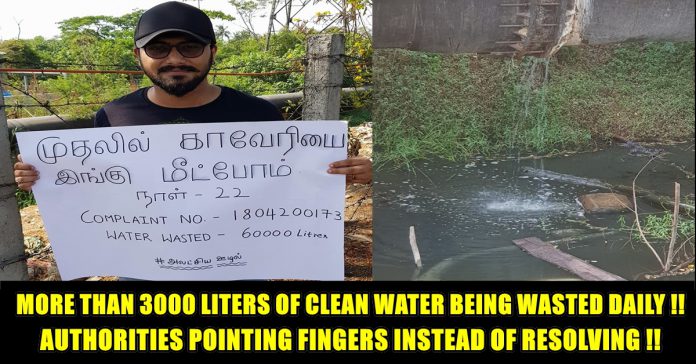 In a state which is predominantly protesting in a daily basis for water to the other states, it is undeniable that we somewhere missing the core point. It becomes more evident when we witness incidents such as corporation water lorry roaming around the city by leaking the water in the roads of Chennai to an extend we may doubt whether the vehicle is providing water to the city or cleaning the city. We almost forgot what the rain water harvesting is. Similar incident grabbed the attention of a passerby who went by the Paadi bridge, Chennai. To our shock it is something that should be taken care of immediately. B Gowtham(24), a resident of villivakkam, witnessed a drastic wastage of water nearby the Paadi bridge on 4th of this month. It seemed the constant leakage of the clean water from the water pipe which is 10km long allegedly is leaking all day long and it is mixing with the drainage water underneath. Gowtham inquired the nearby sugarcane juice vendor about the leakage, to his shock the vendor said that it is leaking for several years. He also asked the nearby workers about the leakage and received similar response. There will be more than 3000 liters of clean water is being wasted daily due to the breakage of the pipe says Gowtham.

Regarding this Gowtham raised a complaint to the Chennai Metro water board to which he did not get any positive response. He was convinced by the authorities that the problem will be solved soon. After some days when he saw the broken pipe is still not rectified he approached the authorities again and got a very inattentive answer. They told him that the area of leakage is not belong to their control and they also suggested him to raise a complaint through phone call.

Gowtham also registered his complaint through phone call and the problem is still not rectified instead he gets a text message to his cell phone which says that the problem is closed.

Its been several days since he complained about the issue and the department of water board is not moved a step towards rectifying the breakage of the water pipe.

“I got the information , the water is being wasted for years .
Per day minimum of about 3000 litre of water is wasted . Just within 20 days
60k l of water.

1 middle class family could use that 60kl for 4 members which comprises of top load washing machine for 2 months for sure .

1 week water requirements for paddy crops is 60kl . That will vary when it’s grown .

Minimum requirement for an international cricket ground to get ready for a match is 60k l . ( 60kl to 300k l)

Above all it’s average drinking water for 15000 people per day .

This could be the biggest scam in recent time . I have contacted enough numbers of the particular anna nagar, padi area and puzhal area . Area engineer ashokan’s number is out of reach .”

In his attempt of complaining this to the appropriate authorities once Gowtham received the answer from a official who said “the higher official will only be available after some days, the problem will be looked into soon” which denotes that they even not sure of the problem is going to taken care of or not. The area engineer Ashokan’s phone number is always out of reach Gowtham says.

In this so called Digital India why this simple issue takes so long for them to resolve is what Gowtham asks regarding the issue.

Previous articleDhoni & Co Had To Leave The Star Hotel Because Of The New Comer Ambathi Rayudu..!!
Next articleForget RCB , MI.. Get To Know When The Team India Gonna Face Pakistan & Australia : WORLD CUP Schedule Revealed !!