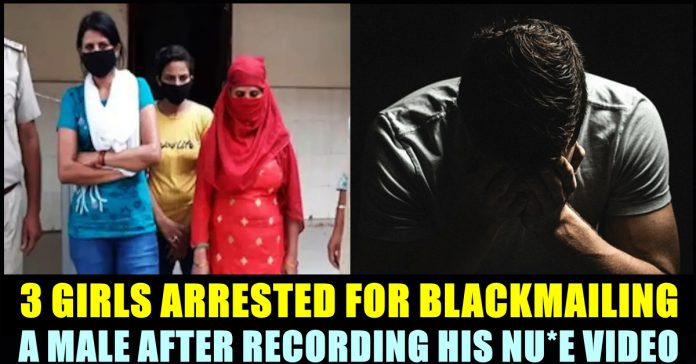 On Tuesday, Police arrested three girls in Haryana’s Yamuna Nagar district for allegedly blackmailing a senior citizen with his naked video. They demanded Rs. 5 lakh from the old man after receiving Rs. 50,000 from him. The incident took place in New Hamida Colony under the jurisdiction of Yamuna Nagar Police station.

They who entered the old man’s house by pretending to be a police officials, reportedly asked the man to remove his clothes before recording it with their cell phone. After recording the video, they threatened the old man to pay Rs,5,00,000 and blackmailed him of uploading his video on Internet. The received Rs.50,000 from him initially, says the reports.

After being threatened to pay a hefty amount, the senior citizen, without having a choice, informed the Yamuna Nagar Police. Cops arrested the three girls after laying a trap. Sukhbir Singh, in charge of the Police station said that the victim lives alone in his house and added that the girls tried to make use of the situation. According to the complaint made by the old man, a woman entered his house first and within a span of 5 minutes, other two women entered the house.

He alleged that the women demanded him to remove his clothes, pretending to be police officials. They said that he started removing clothes after being threatened by them. They reportedly threatened to send him to the jail in a false case. According to him, they forced him to do whatever they wanted. The girls got arrested and are expected to be presented in court.

The victim has a son and a daughter. His son lives in abroad and the daughter got married which left him alone in his house in Yamuna nagar. His daughter arranged him a maid to cook food and do other works. However, when the incident took place, the maid left to her home after finishing her works. The incident has created shocking waves in Internet with reactions pouring from all over the social media platforms.

Previous articleJUST IN : Madan OP Got Arrested At Dharmapuri !!
Next articleFans Thrashing ICC For Choosing England As Venue For Finals !!

What Dhoni Actually Told To Deepak Chahar In The 19th Over ?? Malti Chahar Reacts !!

Chennai Super Kings skipper MS Dhoni is known as ‘Captain Cool’ for a reason. Whatever the situation, he just doesn’t let his emotion get...

During his campaign at the Viralimalai constituency, Chief Minister Edappadi K Pazhaniswamy has requested the public people who gathered to take COVID vaccine at...