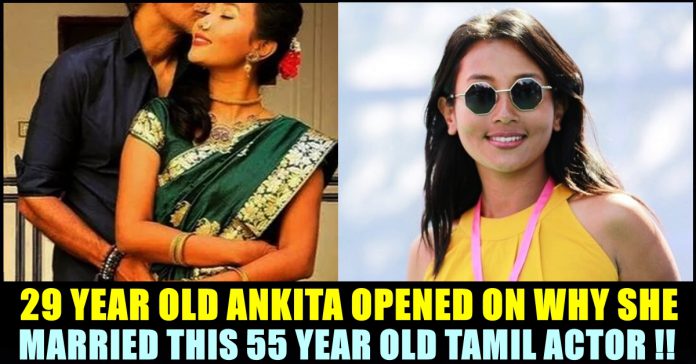 Milind Soman who is known among Tamil film audience through films such as “Pachaikili Muthucharam”, “Paiyaa”, “Alex Pandiyan”, got married to Ankita Konwar in 2018. His marriage grabbed the attention of media and fans as the age difference between the duo is 26 years. Soman was 52 at that time and Ankita was 26 and they became a subject to severe online trolling and forced to answer several questions. However, the duo stayed together all these years and their love for each other only grew over the years.

Now, during a question and answer session conducted by Ankita in her official Instagram, a follower asked her to answer on how she manages the Indian stereotype of not marrying older men. Replying to her Ankita said that people would always like to talk about that is unusual in the society. She said that it just not limited to India but all around the world.

“Anything that’s not common in a society, people usually like to talk about it. And it’s not just limited to India. We as a species have the tendency to get weird about the unknown, the unexplored AKA fear. A survival skill. And some times we are not conscious enough to distinguish between the utility and the waste of that skill. I have always done what makes me happy.” Ankita replied through her story.

It is reported that Ankita met Konwar when she was just recovering from the shocking demise of her boyfriend. While she was posted in Chennai as a cabin crew member of Air Asia, she saw actor Milind Soman at a hotel. She who identifies herself as a big fan of him, went to say a “Hello” to him but he was busy at time. However, time united them as she saw him again at a night club in the same hotel.

In an interview, Ankita said that her friends pushed her to dance with him which she did and looking at each other for a long time. She said that Milind convinced her that she is the man for her but she took her time to fall in love with him. When she said that she couldn’t come in terms with the sudden demise of her boyfriend, Milind said ‘When I fell in love with you, I fell in love with all of you. Even the part that carries the burden of your past. So don’t be afraid, we’re in this together.’ That’s when I knew–this was the man for me!” to her which made her to decide that he was the one for her.

Bigg Boss is a show that is being widely watched by families in Tamil nadu. The show which identifies itself as a miniature of...

Mumbai Indians pulled off a dramatic last-ball win against Chennai Super Kings in the final of the Indian Premier League to record their fourth...