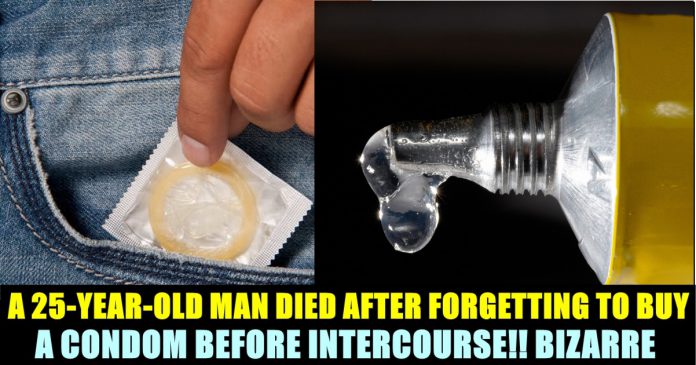 A man died at Ahmedabad in Gujarat due to multi-organ failure after using epoxy adhesive to seal his private parts during intercourse instead of a condom.

Salman Mirza was a 25-year-old young man residing at Fatehwadi, Ahmedabad in Gujarat. He was the sole breadwinner for his family, which includes his elderly parents and two sisters. He and his fiancee intended to be in intimacy. Salman Mirza and his fiancee booked a hotel room at Juhapura in Ahmedabad.

The couple realised that they had forgotten to bring the condom for protection. In order to avoid pregnancy, Salman decided to use strong adhesive instead of a condom as protection during intercourse.

Salman Mirza left dizzy after this. So the couple checked out of the hotel room to get back to his home. But he was found unconscious on the shrubs of the hotel in Juhapura. One of his close friends, Firoz Shaikh saw that him unconscious there and took him back home.

Salman Mirza’s family decided to take him to the nearby hospital. He was admitted to Sola Civil Hospital, where his condition deteriorated and this caused him to death. The viscera samples of the deceased had been sent for forensic examination. This incident took place on the 22nd of June 2021.

After his death rituals, Sayrabanu Mirza one of the relatives of Salman Mirza had filed a complaint in the Vejalpur Police Station on June 25. The investigation was made by the police officials.

Now the police have discovered that the cause of his death is multi-organ failure due to the use of epoxy adhesive to cover his private parts for protection instead of a condom during intercourse.

The police had further reported that Salman was accompanied by two women when he checked into the hotel room at Juhapura in Ahmedabad. With the help of CCTV footage, it was found that one woman left in a two-wheeler and another woman stayed with him.

The Vejalpur police also found that both Salman Mirza and his fiancee was addicted to drugs. It was the intake of the drugs that made them use the epoxy adhesive to cover the private part instead of a condom during intercourse.

This bizarre incident not only shocked the people of Ahmadabad in Gujarat but also all the youngers in the country. This news is going viral among the media houses. To avoid such incidents in future, there such be condoms in the hotel rooms itself along with other necessaries. There is nothing wrong with using a condom during intercourse. Nowadays even the government recommend using condoms to avoid birth control.

Previous articleArya Finally Opened On The Mental Trauma He Went Through Due To The Cheating Case !!
Next articleHashtag ‘India On Sale’ Trending On Internet Since Last Evening!! Check Why!!

Actress Gives Back To Those Who Abused Her !!

Actress kasthuri who is having a constant rivalry with the alleged fans of Actor Ajith in Twitter, slammed them again for behaving in a...