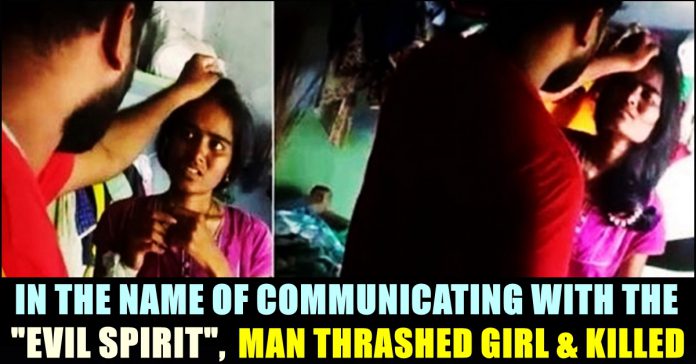 Kanakuntla Rajitha, a 24 year old woman who belongs to Kundaram Village in Mancherial district of Telangana, died while undergoing treatment in a hospital after getting severely thrashed by a self proclaimed sorcerer. She died in a hospital located in Karimnagar on the night of Monday. The news came to light after the video of the lactating woman getting thrashed by the sorcerer went viral in social media platforms on Sunday.

Rajitha gave birth to a baby girl four months ago and was not well for a few days. Her family members reportedly showed her to Duggala Shyam, an alleged occultist who made the family members of Rajitha believe that she was possessed by an evil spirit. He told them that he can cure Rajitha with his super power and visited the victim’s house later.

In her house, Shyam pulled Rajitha by her hair and literally thrashed her, claiming that it is a part of getting information from the evil spirit that possessed Rajitha. At one point, Shyam forcibly pushed Rajitha onto a bed which caused her severe head injury. She was immediately admitted to a hospital named as Prathima Private Hospital as her health condition became critical after the head injury.

She died in the hospital after five days of treatment and the final rites were performed at her native Gadakkapa village of Shankarapatnam mandal. Reports suggested that she died of internal bleeding in the head. Duggala Shyam and his accomplice Pulikotta Ravinder got arrested by the Police and a case was registered. Reports also suggested that Police have booked her husband.

Rajitha who was an orphan completed her graduation and post graduation by staying in a social welfare residential hostel, Subhashnagar of Karimnagar town. To get training in a self employment programme, Rajitha migrated to Hyderabad in 2018. While working in Ratnadeep malls in Kukatpalli, she developed a friendship with Mallesh. Later it turned out as a live-in relationship according to reports and they gave birth to a baby girl months ago.

The complainant Suresh, the woman’s cousin from Shankarapatnam of Karimnagar, has alleged that Rajitha was subjected to dowry harassment before she took ill. He alleged that the girl got married to Mallesh two years ago. “they got married two months ago and her in-laws were harassing her for not bringing dowry” he said who wanted the culprits who are responsible for Rajitha’s death to be punished severely.

Vanitha Vijayakumar who earlier replied to Lakshmi Ramakrishnan for criticizing the personal choices she made, now confronted senior actress Kutty Padhmini for making a...