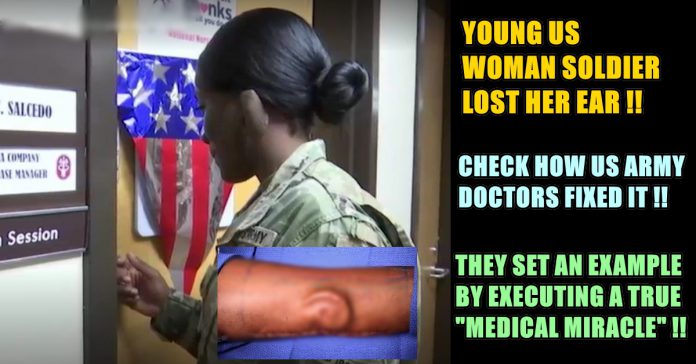 21 Y/O Woman Soldier Lost Her Ear In An Accident : Check Out How US Army Doctors Fixed It !! : Unbelievable !!

Two years ago, Army Private Shamika Burrage almost died when she was ejected from her car during a crash in Texas.

Afterward, when she woke up in the hospital, she wasn’t whole. Her entire left ear was gone.

But the now-21-year-old is on the path to recovery. And due to a procedure hailed as the “first of is kind” in the Army, an ear was reconstructed and “grown” under the skin of her right forearm, according to the Army. No prosthetics were needed. Instead, plastic surgeons used the soldier’s own cartilage.

The ear was later attached to Burrage’s head by surgeons at William Beaumont Army Medical Center in El Paso. The Army said Burrage recovered her hearing and that the operation was a success, according to a statement on Monday.

The total ear reconstruction involved doctors carving a new ear out of cartilage harvested from Burrage’s ribs, the statement said. The ear was then placed under her forearm skin to let it grow. The procedure is one of the most complicated ear constructions in the US, according to an ABC News report, and allows for the formation of new blood vessels in the cartilage.

This means Burrage will also have feeling in her new ear once rehabilitation is complete, the Army’s statement said.

“The whole goal is by the time she’s done with all this, it looks good, it’s sensate, and in five years if somebody doesn’t know her they won’t notice,” Lieutenant colonel Owen Johnson III, the chief of plastic and reconstructive surgery at the medical center was quoted as saying in the statement.

“As a young active-duty Soldier, they deserve the best reconstruction they can get,” he said.

Losing her ear was just one of many injuries Burrage sustained in 2016 when the front tire of her car blew out, causing the car to skid 700 feet before flipping multiple times.

Burrage had been driving with her pregnant cousin from Mississippi to Fort Bliss, Texas, when the crash happened. While her cousin managed to escape with only minor wounds, Burrage suffered head injuries as well as compression fractures in the spine.

“I was on the ground, I just looked up and (her cousin) was right there,” she said in the statement.

“Then I remember people walking up to us, asking if we were okay and then I blacked out.”

At the end of the rehabilitation process, the ear “will have fresh arteries, fresh veins and even a fresh nerve so she’ll be able to feel it,” Owen Johnson, the chief plastic surgeon at William Beaumont Army Medical Center in El Paso, says in the statement. To perform the reconstruction, Army doctors harvested cartilage from Burrage’s rib cage, and carved the tissue into shape. Then, they inserted the cartilage into Burrage’s forearm and left it to stretch out and grow its own skin until it could be removed and attached to her head. “The whole goal is by the time she’s done with all this, it looks good, it’s sensate, and in five years if somebody doesn’t know her they won’t notice,” says Johnson.

Now that the ear has been transplanted, Burrage will undergo further surgery to cover scar tissue on her head, according to the statement. Fortunately, “I didn’t lose any hearing and (Johnson) opened the [ear] canal back up,” Burrage says in the statement. “It’s been a long process for everything, but I’m back.”

Earlier, Johns Hopkins Hospital doctors announced that their plastic and reconstructive surgeons had successfully carried out the world’s first transplant of a penis, scrotum and abdominal wall on a soldier who had sustained injuries in Afghanistan, losing his genitals.

Doctors hope that in a few months the patient will be able to urinate while standing, and that later his sexual function will be also restored.

Actor Thavasi who is known for appearing in Sivakarthikeyan's "Varuthapadatha Valibar Sangam" as a fake astrologer, has been combating cancer and actors of Tamil...

Two new posters of Dhanush's upcoming film Asuran were unveiled yesterday. Actor Dhanush took to Twitter to share the posters with his fans, who...