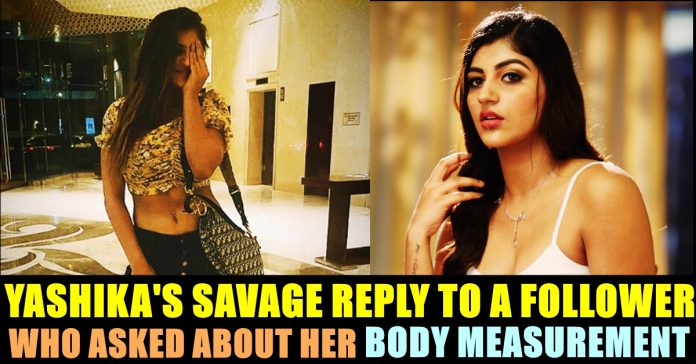 Yashika who has been facing constant criticism for her attires and for the roles she is choosing to do, never shied away to give back her opinions to the trollers and abusers. The young actress rose to fame among Tamil cinema audience through her stint in reality game show Bigg Boss which was hosted by Kamal Haasan. Before that she appeared in an erotic horror film Iruttu Arayil Murattu Kuththu which gained her enough fame at the early stage of her career. Being a 20 year old actress, Yashika is known for her bold statements and instant replies to her haters in social media platforms.

In this recent chat session, many followers asked the actress to tell her age, upcoming movies, likes and dislikes etc. Yashika who could have avoided inappropriate questions, held her nerves and gave them replies, in a way of shutting them down once and for all.

To one of her follower who asked Yashika to tell her body measurements, the actress replied to him by asking “why?? Are you planning on stitching clothes for me post quarantine?” with a sigh emoji.

Check out the screenshot of her Instagram story here :

Another follower asked Yashika to complete her studies and continue pursuing acting later. “Why do we study?? To acquire the knowledge and of course for the fact of getting a degree ! And What’s next ? Earn money with your blood and sweat ! And I believe that opportunities are very important when it comes your way ! So make the best of it ! I’m glad until I have my time in the industry I will give my 100%. And later I can always study and get a degree. Education has no age but opportunities in industry are unpredictable! can’t be more honest” she answered to him. Here’s the screenshot :

Check out her other replies for her followers below :

At 14, she first shot for the film Inimey Ippadithan alongside Santhanam but her role was later deleted after she could not attend a song shoot. She later portrayed a one scene role as a swimming instructor in Kavalai Vendam. Yashika is also considered as one of the boldest contestant in the BIGG BOSS show who speaks her heart out. The actress is all set to appear in Raja Bheema, Ivan Than Uthaman and a 18+ webseries under Viacom productions.

Comment your views on these replies of the actress to her followers!!

Previous articleJUST IN : Ajith Called Vijay Personally To Know About Sanjay !!
Next articlePopular Actress Replied To Those Who Questioned Her For “Not Wearing Bra”

The chairperson of the committee on the new National Education Policy, K Kasturirangan, has cleared the air on the Hindi bias in the draft...