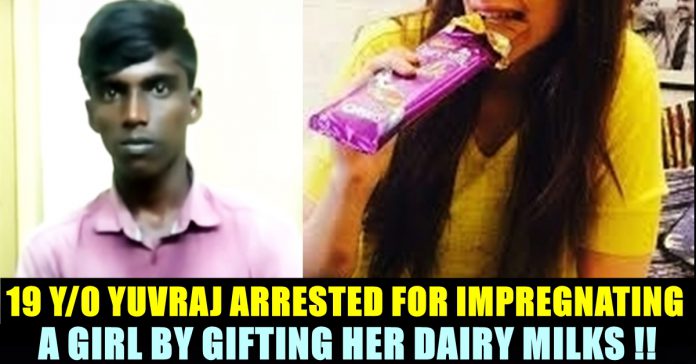 A teen named as Yuvraj impregnated his former schoolmate in the pretext of marrying her in future and got arrested by the Police after the girl’s mother admitted her in a hospital due to health issues. The boy, reportedly gifted her Dairy Milk chocolates frequently which is worth Rs.100 to make her believe that he is truly involved in the relationship. The 19 year old got arrested by the Police under The Protection of Children from Sexual Offences act.

The 17 year old Sudha (name changed) who belongs to Edamalaipatti of Trichy, got admitted to a government hospital in Trichy with the help of her mother due to health issues. Doctors who tested the girl, told her mother that she is 3 months pregnant. They also informed about the girl’s health state to the Women Police Station Cantonment In Trichy.

Police who rushed to the hospital, investigated the girl about the pregnancy. She who discontinued her studies after completing 12 th standard, told the police officers that a boy named as Gokula Kannan with whom she fell in love in the year 2018 is the reason for her pregnancy. Gokula Kannan and Sudha were studying in the same class of 11 th standard, according to Sudha’s statement.

Sudha further told the officers that Gokula Kannan gifted her a 100 rupees worth Dairy milk chocolate on 2nd of October and started having physical relationship with her after promising about their marriage. She made police believe that it is the reason behind her pregnancy. Police started searching for the boy as soon as getting the confession from Sudha. They also registered appropriate cases against him, according to Polimer.

The contact numbers Sudha gave were also not reachable. After a while, Police who decided to conduct an interrogation in the school, found there was no boy named as “Gokula Kannan” studied. As a result of this, Police again started investigating Sudha who accepted that what she said in the Preliminary investigation are complete lies.

She revealed that a boy named as Yuvraj who studied with her till 9th standard was the real reason behind her pregnancy. The 19 year old Yuvraj discontinued his studies while they were in the 9th standard, reports suggests. She also revealed that Yuvraj proposed her during 8th standard but she rejected. However, he frequently gifted dairy milk chocolates to Sudha and made her accept his proposal, according to Polimer.

The duo were involved in a romantic relationship for a long time and Sudha became pregnant. Sudha said that she lied to the Police initially only to save him from them. The girl was admitted in a centre and the boy was arrested under POCSO act.