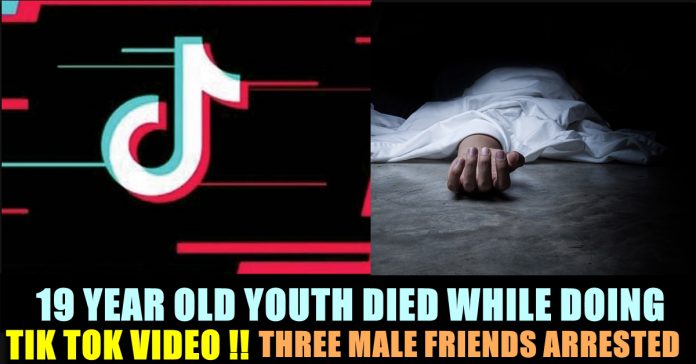 A 19 year old youth died after coming from India Gate with his friends. The reason for his death is bizarre as three of his friends arrested for trying to destroy the evidence.

According to the police officers they received call from the hospital around 2:30 in the morning. The police arrived at the hospital and found Suhail one of the friend missing.

Returning home after a quick drive to India Gate, a 19-year-old man was shot dead, allegedly by his friend, inside the car the two, along with a friend, were travelling in on the Ranjit Singh Flyover near Connaught Place on Saturday night, the police said.

Madhur Verma, the deputy commissioner of police (New Delhi), said that Suhail Malik, the 24-year-old suspect arrested for the murder, claimed the shot was fired “accidentally” when they drove over an uneven stretch of the road while filming a video for the TikTok app.

However, the DCP said Suhail wasn’t getting the benefit of the doubt as he tried to destroy evidence by getting rid of his blood-stained clothes and hiding the countrymade pistol.

Two others were arrested for allegedly destroying evidence — Suhail’s cousin Aamir Malik, the third occupant of the car, and their friend Sharif, who allegedly helped hide the clothes and pistol. The victim, Mohammad Salman, lived with his family in north-east Delhi’s New Jafrabad. His father owns a jeans-manufacturing unit and Salman sometimes used to assist him.

Suhail and Aamir lived in the same neighbourhood as Salman. Suhail’s father deals in plywood and owns houses in New Jafrabad as well as in Daryaganj.

The DCP said that the trio had left for India Gate around 9.45pm on Saturday in a white Hyundai Creta owned by Salman’s cousin. Salman was behind the wheel, Suhail was seated next to him and Aamir was on the rear seat. The incident took place on the Ranjeet Singh Flyover, just after Barakhamba, the DCP said.

Police said the pistol was allegedly in Suhail’s hand. “Suhail has told us that he was holding his pistol in his hand to record a video for the TikTok app. As they passed by the Lalit Hotel around 10.30pm, an uneven part of the flyover caused the car to lurch, leading to the shot being fired,” the DCP said. Police said they were trying to ascertain where Suhail got the pistol from.

Salman was shot through his left cheek and the bullet passed through his right ear. He slumped at the car’s steering wheel, but the vehicle didn’t get involved in a mishap, the police said.

Thereafter, the two men allegedly moved the injured Salman to the passenger seat as they drove the car to Suhail’s second home in Daryaganj.

Mohammad Imran, a common friend of the two families, said he was on a visit to the Daryaganj house around 10.45pm when Suhail’s father received a call that left him visibly worried.

“Minutes later, Suhail drove the Creta to the house. I saw Salman’s head slumped against the window. Suhail and the others didn’t know what to do next, so I asked them to rush Salman to a hospital,” Imran said.

According to the DCP, Suhail and Aamir left for New Jafrabad to dispose off their blood-stained clothes and the pistol while Suhail’s relatives rushed Salman to Lok Nayak Hospital.

“None of them informed the police about the shooting. Though we have now recovered the pistol and the blood-stained clothes, serious efforts had been made to destroy the evidence. These things point to some kind of criminal intent,” the DCP said. The DCP said that all possibilities were being probed.

“We heard rumours about a possible love triangle, but the families of Salman and Suhail have denied any such thing,” the DCP said.

Previous articleTahir & Harbhajan Singh Went One Step Ahead This Time !! This Will Melt Your Heart !!
Next articleRishab Pant & Ambati Rayudu Not Included In World Cup Official Squad !! Here’s How Internet Reacting !!