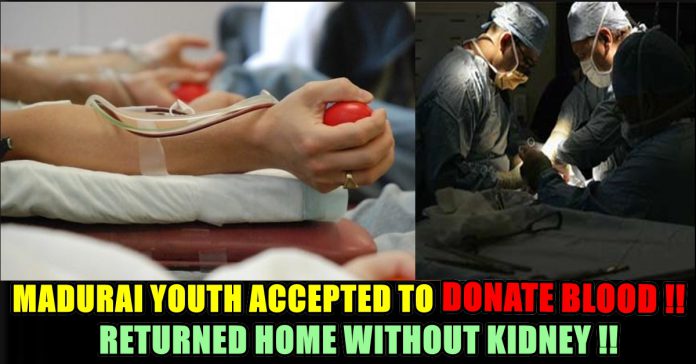 S. Mohammed Bakrudin, 19, has complained against four persons, including a doctor of a private hospital, accusing them of having “stolen” one of his kidneys on the pretext of giving him treatment for “a blood infection”.

The boy and his widowed mother, Shakeela Banu, 35, claimed that one Raja Mohammed and Basheer, who were introduced to her by a relative, had been helping the poor family with groceries for the last few months. Suddenly, one day, Basheer approached Banu with the plea of asking Bakrudin to donate his blood for his son Azharuddin, who was sick. After some reluctance, she agreed.

However, after taking Bakrudin to a private hospital in the city, the duo claimed that his blood was infected and he required treatment. As Banu wanted to take him to the government hospital, the duo intervened and promised to provide the treatment at the same private hospital at their expense. “The boy was admitted to the hospital in November 2017 and discharged after a month,” her advocate, K. Neelamegam, said.

As the boy often complained of fatigue and could not take normal diet, the mother took him to another hospital, where she was told that one of his kidneys had been harvested. The advocate said a complaint lodged with Melur police did not evoke any positive response. The accused promised to help the family.

However, a copy of another complaint petition addressed to Inspector of Police, Madurai district, which was handed over to Superintendent of Police N. Manivannan on Monday suggested that the boy was aware that one of his kidneys was being donated for Azharuddin after Raja Mohammed promised to take care of the family. They had also promised to bear the marriage expenses of Banu’s daughter. “When we approached them (the accused) seeking money as promised for my sister’s marriage, they refused to give the money and also threatened me with dire consequences,” Bakrudin said in the complaint. However, the advocate said the hand-written petition was drafted by someone close to the accused.

The SP said the complaint had been forwarded to the Deputy Superintendent of Police, Melur, for further investigation. “The veracity of the complaint about kidney theft needs to be medically confirmed,” he said. A police officer said since the surgery was said to have taken place under Madurai city police’s jurisdiction, the complaint could be forwarded to the city police. The advocate said he would move the Madurai Bench of the Madras High Court seeking action against all the accused.