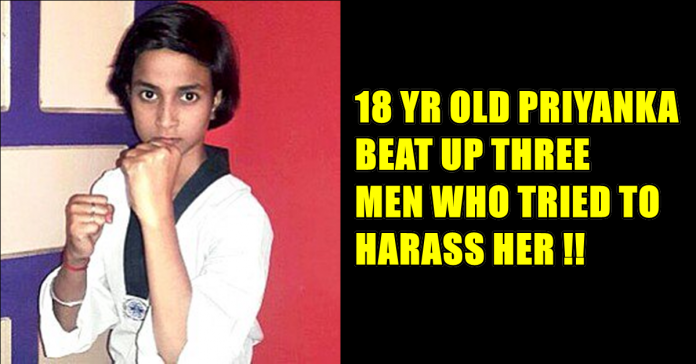 18 Yr Old Girl Single Handedly Beat Up 3 Men Who Tried To Harass her !!

18-year-old Priyanka Singha Roy, accompanied by her younger sibling on a cycle was on her way to a shop at Kamarpara, Sainthia municipality on Tuesday. Though the shop was merely about 500 meters away from their home, the alley leading to it was deserted. The accused three men, in their mid-twenties, started passing lewd comments. The harassers blocked her way and one of them even tried holding her hand.

Despite Priyanka repeatedly telling them to back off, the men continued to harass them. What happened next was hardly what the harassers were prepared for.

Faced with no option, the 18 year-old, who had started learning martial arts (Taekwondo) only ten months ago, overpowered and beat all the three men up. By the time people heard the furore and reached the spot, the young girl had thrashed the three men. The three accused – identified as Amit Sahani, Dip Mandal and Bhaskar Mandal — were arrested after people caught them in Sainthia, about 195 km from Kolkata. Police said they are in their mid-twenties.

Though the girl couldn’t be contacted as she’s appearing for her 12th board exams, her mother praised her brave daughter and told Hindustan Times:

“My daughter is a keen student of martial arts. The youths were not aware of her skills. My daughter initially asked them to restrain themselves, but they paid no heed and continued with their lewd behaviour. Then she beat them up.”

The mother of the woman lodged a complaint against the three accused to the police after the incident.