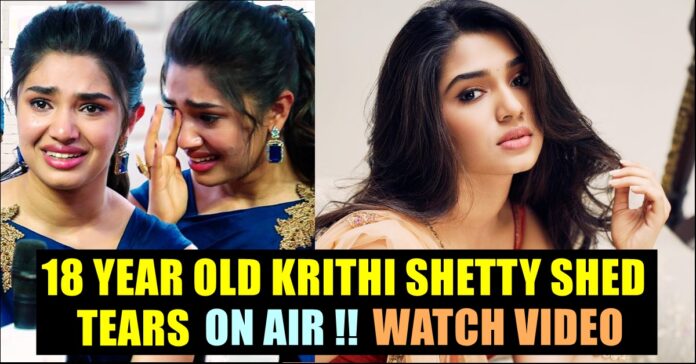 Actress Krithi Shetty who has been sending waves among the audience of Telugu cinema through her acting skills at a young age of 18, shed tears in a show of a private channel after witnessing a prank in front of her eyes. She who was seen casual in the beginning, started crying and said that she don’t like people behaving harsh to one another. The show was run my Sarithiran, a famous prankster who is known for his prank show “Vada Poche”.

Krithi Shetty participated in the Behindwoods Gold medal award function and received an award. The actress made her debut in Telugu film industry through a film named “Uppenna” while she was just 17 years old. Further, she went on to star opposite Nani in his “Shyam Singha Roy” and is all set to appear in “The Warriors”, a Tamil, Telugu bilingual film directed by Linguswamy. The actress is pairing up with Ram Pothineni in the film, “Bulletu song” of which became a chartbuster already.

In Tamil, Krithi Shetty is going to debut with a film of Bala, starring Suriya. Tentatively titled as “Suriya 41”, one schedule of the film got completed and is marching towards the second schedule. Apart from the fan following she is enjoying among Telugu circuit, Krithi holds 3.2 million followers as her Instagram followers. She has been engaging them by uploading the pictures from her photoshoots and also updating about her works.

Recently, Krithy Shetty participated in an award function conducted by Behindwoods youtube channel. Prior attending the show, she was scheduled for an interview with Ashiq and Sarithiran, a popular prankster. The duo pretended to be interviewing Krithi and started arguing with each other over wo is going to question her.

Sarithiran introduced Krithi Shetty as Keerthy Suresh and asked her a little bit of quirky questions to her. At one point, he pretended like slapping Ashiq and revealed that it was just a “prank”. Krithi who was taken aback by surprise initially, started shedding tears out of fear and sadness. “I don’t like people behaving harsh between each other” she said in a breaking voice.

Many who saw the video, admired the actress’s kind heart that sheds tears for the struggles faced by others whereas few criticized the pranksters for making Krithi cry. 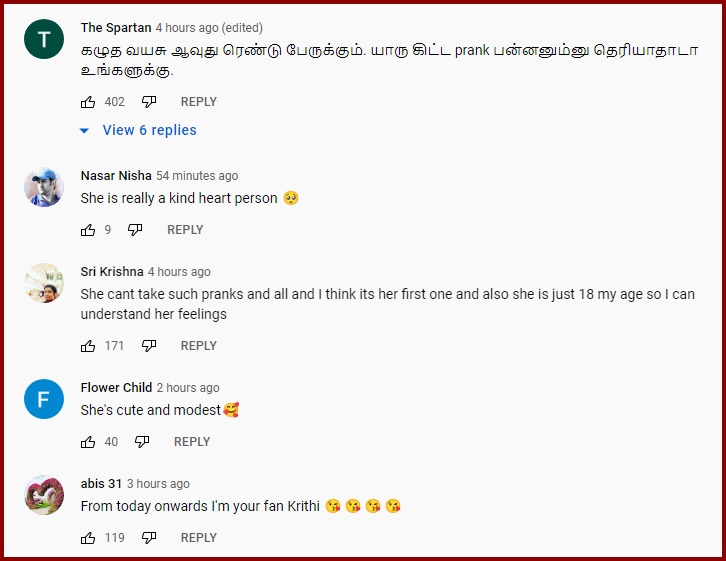 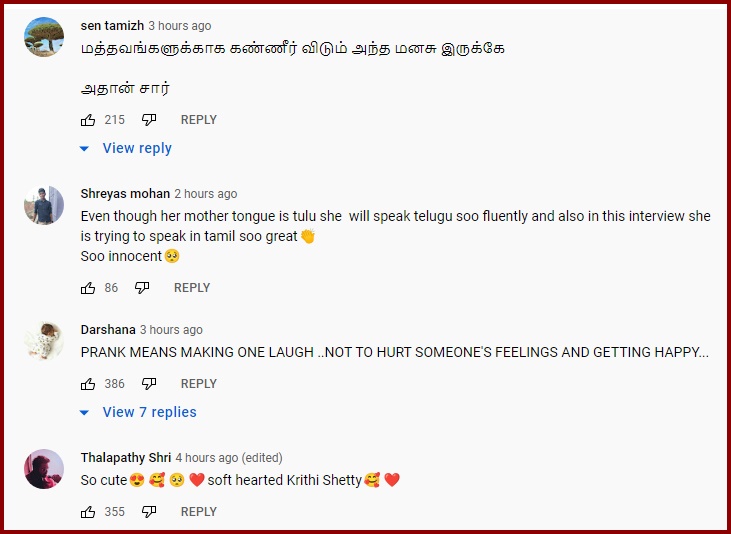 Previous articleFinance Minister PTR Is In The Receiving End For Allegedly Mentioning Caste Identity Of A Journalist!!
Next articleRCB Getting Trolled From Every Direction Of The Internet!!

For The First Time In History, Oscar Released The Video Of A Tamil Film !! Fans Just Can’t Keep Calm