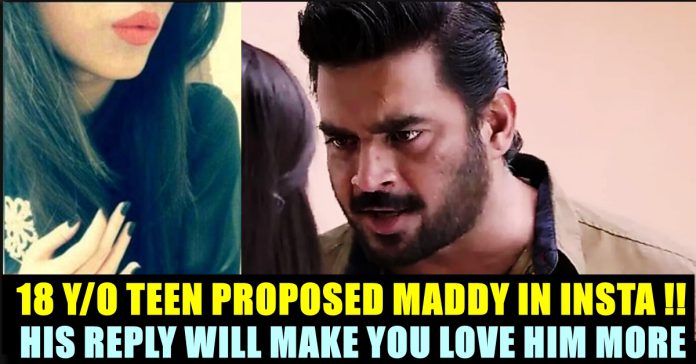 The 48 year old who is very much active in social media often interacts with the fans who mentions him or replies to his post. The actor lately uploaded a selfie of him in his official Instagram account. The post’s caption updated about the editing process of his upcoming film. His post read as “Editing is so much fun and exhausting:. Enjoying and fearing it..End of long travel day. Definitely getting older .. 🤣🤣🚀🚀🙏🙏#rocketrythefilm #actormaddy #Rocketryfilm”

Editing is so much fun and exhausting:. Enjoying and fearing it..End of long travel day. Definitely getting older .. 🤣🤣🚀🚀🙏🙏#rocketrythefilm #actormaddy #Rocketryfilm

To this post many young girls replied including the heroine of Arjun Reddy, a recent blockbuster in South India. Shalini Pandey said “Getting older never seemed so good!!!!!♥️ And much excited for your venture💃🏽” to which Maddy posted a reply as a gratitude.

What came as a surprise is, a 18 year old Instagram using girl, after seeing this selfie of Madhavan, proposed him and even asked is it wrong to Maddy himself. To that Maddy. who is known for his kind gesture towards his fans politely said “ha ha God bless you.. you will find someone way more worthier”

Check out their conversation here : Check out some more replies and Maddy’s response to them : In the same manner, a young girl proposed Madhavan in Twitter to which Madhavan gave a kind reply which won him hearts all over the Internet. Actor Madhavan Reacts To A Girl Who Accidentally Proposed Him To Marry Her !! Check How !! What do you think on this gesture from the actor ?? Comment your views below !!

Indian playback singer, Chinmayi Sripada Twitted about the body-shaming video of Deepa Shankar on the 2nd September of 2021. The Cook With Comali fame...

Famous youtuber Jaanu who is running the couple youtube channel "Raam with Jaanu" that has 1.8 million followers, responded to a body shaming comment...

Actress and Bigg Boss contestant Sherin opened up for the first time regarding the issue that took place between her co-contestant Tharshan and his...