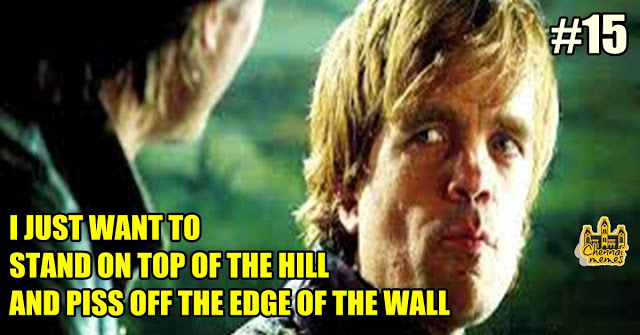 TYRION LANNISTER will
now and forever be the most favourite cast of GoT !!

I guess
everyone would agree with me when I say that Tyrion Lannister is by far the most loved and admired character of
GoT undoubtedly! You can be Team Jon Snow or Team Daenarys Targaryen, but
definitely a huge fan of Tyrion for his witty attitude and one-liners that
stomped everyone!
He has been
the ultimate survivor so far by his brainy dialogues though enduring a terrible
childhood and mocked life throughout. And getting his heart broken not once but
twice and still being the undaunted dude of GoT!
And here are
18 reasons that would prove you beyond doubt that he’s the ultimate rock star!!
1. He’s the epitome of wine and
ladies.. he couldn’t
survive without them or the other way around?!

2. Was brave enough to lead an attack
despite his size and an idiotic King Joffery.. oh, remember the scoundrel running to
his mama’s den when Tyrion fought bravely!

3. He has the audacity to insult even
kings.. like a pro!

4. He mocks himself and makes it
sound so casual.. this
man knows what he’s saying!

5. He taught us so many good things..
adored these life
philosophies from him, didn’t we?!

6. When people think they have
snubbed him, but his comeback is kick-ass.. take that you bloody bitch !!

7. He can be funny as hell.. and very very lucky indeed!

8. And definitely ferocious as well..
don’t you dare
tickle his ego..

9. He can distinguish death and life
so easily for us.. there’s
the guy that I love again!!

10. He’s sarcastic to the next
level.. give him a
medal already, please!!

11. He speaks up the truth even if
it’s bitter, and even if it’s to the queen.. giving his word to Daenerys when no one else did!

12. When he defends himself on that court
scene and speaks his mind out.. I would have taken my pom-poms and cheered him the loudest
for this!

13. Oohh, and when he says he demands
a trial by combat.. we
can be assured of some thrill to be followed!

14. He can be funny and royally harsh
at the same time.. well,
imagine the look on Cersei’s face when you see this!

15. When he makes the world feel below
him and you actually give a hi-fi to him for that.. and remember the scenes where he really
did this!

16. His tactful ways of escaping
tricky situations.. he’s
definitely got a witty presence of mind!

17. Nobody can match his bravery.. of course by his talking!

18. And when he became the real
hero.. I did a
jumping dance when I watched this and was never happier seeing a scene in GoT
as this one!!