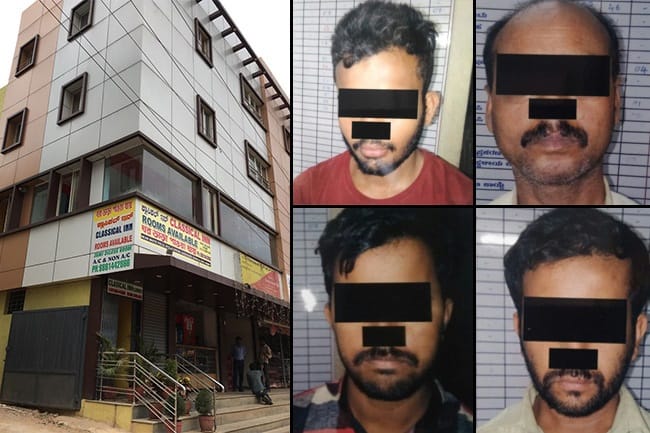 A 17- year- old girl was repeatedly raped by four men over a period of ten days in Whitefield area, Bangalore.

According to reports, the teenager was allegedly kidnapped on October 26th and was under the custody of the 3 kidnappers and was repeatedly raped by them. Initially, the owner of the lodge warned the accused saying that he would inform the police, but the three men managed to convince the owner and in return they offered him an invite to join the crime, to which he gave his acceptance. “In her complaint, the girl has said that three men, including the lodge owner, had raped her repeatedly,” a police officer with the KR Puram Police Station said.

In her statement to the police, the girl, Sneha* said that on October 26th night, she had gone to Whitefield Railway Station where she was supposed to meet her classmate. Sneha was all set to go to a party and her classmate was to pick her up from the railway station.

Sneha reached the station as per her plan. At the station, two of the four accused Sagar (22) and Raghavendra (27), approached her and claimed that they were friends of her friend and came to pick her up. With no doubt Sneha joined them.  They then took her to classical inn, and told her to wait for some time.

A few minutes later, Sagar entered the room and allegedly raped her, followed by Raghavendra and another man named Manju Raj.  Meanwhile, Manoranjan pandit, the owner of the lodge also raped the girl, after he was convinced by the three others.

The girl’s parents had registered a complaint with the police four days after she went missing. She was rescued after the police received a tipoff about a girl in distress at the lodge.

The police suspect that Sneha’s classmate was also involved in the crime and are investigating that angle.

Previous articlePlay these 9 Mobile Games and relive your childhood
Next articleSHAME: 18 Months-Old Toddler Was Raped By Her Father’s Friend

This Young Actor Got Extremely Angry On Tharshan For Questioning Kavin !! CHECK OUT !!