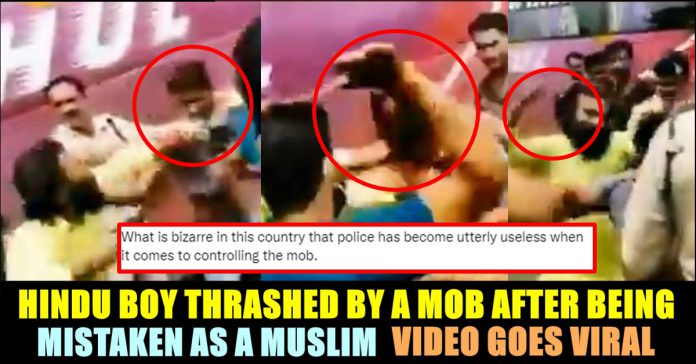 A 16-year old Hindu boy who had run away with a minor girl was beaten up by a group of men at Dewas in Madhya Pradesh allegedly on suspicion that it was a case of so-called ‘love jihad’. The mob trashing the minor boy is going viral among internet users.

It was reported that the 16-year old boy eloped with a 12-year old girl from Balia in Uttar Pradesh. Police officials in Dewas had been alerted to look out for them. Prashant Singh Bhadoria, Sub-Divisional Officer of Police (SDOP) of the Sonkach area reported that A team of police personnel spotted them in a bus at the Bhunsara toll booth, 17 km from Dewas city. No arrest has been made so far in connection with the incident which took place four days ago.

As the police were taking them to the police station, a dozen of men came from nowhere and started to hit the boy. It was later reported that over a dozen men, who were apparently following the bus in two cars, appeared on the spot and set upon the boy. It is clearly seen in the video that the men are severely beating, slapping and hitting the minor boy.

All these cruelties took place in front of the police officials. Though the police tried to stop the mob, they could not succeed. It seems as if the police has no power over the common people which is creating a bad image on the police department.

It was reported that the group of men mistook the boy as a Muslim and trashed him by saying ‘love jihad’. But in fact, both the girl and boy are Hindu. ‘Love jihad’ is a term used by some right-wing leaders who claim that there is a conspiracy to lure Hindu girls and convert them to Islam through marriage.

The trashing 16-year old boy video is posted by Hindutva Watch. It is an independent research initiative to monitor the reports of attacks on members of minority and marginalised communities in India. The post caption read as, “A 16 years old Hindu boy who had run away with a minor girl from UP, was brutally beaten up by a mob because they mistook him as a Muslim and accused him of Love Jihad.”

This happened in Dewas, MP.

A 16 years old Hindu boy who had run away with a minor girl from UP, was brutally beaten up by a mob because they mistook him as a Muslim and accused him of Love Jihad.

“The girl and the boy were taken to a safe place and later handed over to the Uttar Pradesh police.”, said the Sub-Divisional Officer of Police (SDOP).

On Friday 3rd of September, the  Dewas district police registered a case against four men who were identified from the video, and 15 other unidentified persons under IPC sections 353 (use of criminal force on any person with a public servant in the execution of his duty as such public servant), 147 (rioting), 323 (voluntarily causing hurt) and 294 (use of the obscene word). Further investigations are going on regarding the case.

Check below the reactions of the netizens.

There is something terribly terribly wrong.
The way the mob takes the law into their own hands is extremely frightening.

What is bizarre in this country that police has become utterly useless when it comes to controlling the mob.

The police are just holding the guy instead of taking him to a safe place, like they are giving an opportunity to the mob to hit.

And no doubt there was sense of regret when they realised the boy was Hindu and not Muslim.

Once again the law and order is dead in india after 2014. If the police are not able to control the situation why are they on statutory duty? Public lynching is heinous crime and culprits involved should be given rigourous punishment

Previous articleFemale Contestants of Bigg Boss – 5 Is Revealed??
Next articleVirat Kohli Gives Back To England’s Barmy Army In Style!!

JUST IN : C.S Amuthan Reveals What Kalaignar Told After Watching Tamizh Padam !! Its Thrilling To Listen !!

he prequel Tamil Padam was rollicking laughathon and if this brilliant teaser is anything to go by, we have a worthy sequel in hand....

A statement from Chinmayi's mother grabbed the attention of netizens. According to Indiaglitz, T.Padmhasini, mother of singer Chinmayi, in a recent interview made statements...