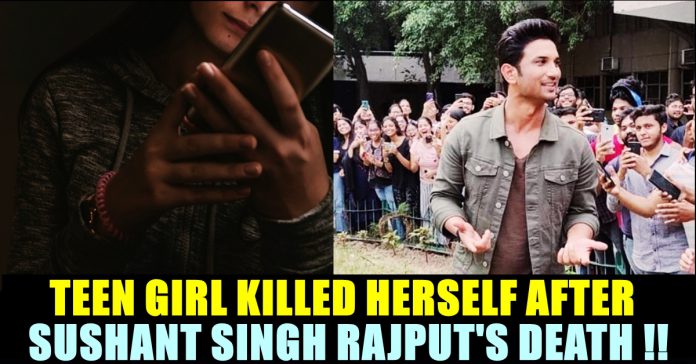 A 15 year old girl who belongs to Andaman and Nicobar Island’s Port Blair, killed herself on 17th of June after writing many things about Bollywood actor Sushant Singh Rajput in her personal diary. Though Police officials couldn’t find any death note regarding the decision made by the teen, her death is connected to the demise of Sushant as she wrote she liked Sushant Singh Rajput very much in her Diary. The actor found hanging in his apartment on 14th of June in his Bandra house and reports suggesting that he died due to depression.

DGP of Andaman, Deepenthra Pathak, while talking to media said that the parents of the deceased informed to police that she was suffering from depression for past few days for unknown reasons. “She wrote a lot about actor Sushant’s singh Rajput in her diary before killing herself. This indicates that she liked the actor very much. However, we haven’t found any suicide note yet” the police officer said.

Days ago, a 10th standard studying student died by suicide after being bullied for his effeminate nature. A day before killing himself, the student said to his brother that when an actor like Sushant Singh Rajput could choose death over life, then he too could do it. This is not the first case of a minor dying after Sushant Singh Rajput’s death.

Earlier, a report emerged on a 17 year old school student who was suffering from depression due to poor performance in her class 10 academics. Despite her parents tried to stop her from watching any depressing news related to the young actor’s death, she didn’t listen and was later discovered dead by a similar suicide attempt. Yet another case suggests that a girl named as Saumya Sriraj, a 9th class student who lives in Cuttack killed herself by hanging due to severe mental pressure due to Sushant’s death.

Sushant Rajput singh died by suicide on 14th of June, at his Bandra, Mumbai home. The preliminary post mortem reports revealed asphyxiation by hanging as the cause of death. Sushant’s demise shocked the entire country as people started predicting the reason behind his death on their own. Enormous number of people blamed the “Nepotism” in Bollywood industry and trended hashtags against it. Social media followers of celebrities such as Karan Johar, Alia Bhatt are decreasing day by day as a result of the 34 year old’s death.

So far, Bandra police have investigated 13 people and recorder their statements as a part of the ongoing investigation regarding Sushant Singh Rajput’s suicide. Sushant’s alleged girlfriend Rhea Chakraborty was interrogated for 9 hours by police officials and many unknown fact revealed by her regarding Sushanth’s death. Read : Actress Rhea’s Shocking Statements In 9 Hour Long Interrogation !!

England captain Eoin Morgan admitted that their fate is in their own hands and cleared the air that the side is not feeling any...

Elimination result of this week Bigg Boss show leaked amidst much anticipation of viewers. Last week, Abishek Raaja became the second contestant to get...

This Actor Bashed Everyone Who Are Praising Pakistan For Releasing Abhinandhan !! Check Out His Full Statement !!

The entire nation welcomed Wing Commander Abhinandan Varthaman as he finally returned home on Friday. The IAF pilot was released by Pakistan after his...