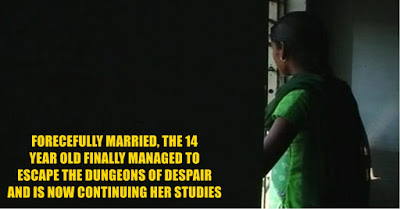 In Telangana’s Nalgonda district, a 14-year-old girl was secretly married off to a man four times her age. After a hard struggle, she has been able to free herself. A four long months of treachery and horror has come to end for this little girl.

In October last year the 14 year old girl came to visit her family from the government-run Kasturbha hostel for tribal girls where she was in class 9. However, the festival went worse when she was married to 51-year-old Ravi Ramavath by her parents.


The man who’s married already and has a son reportedly attracted their parents by saying he’d provide them with enough cash if he was married to their little daughter.

After four months of living in captivity, Revathi managed to call up one of her school teachers and has now been rescued by the child welfare officials. Thanks to her brave decision, she’d be continuing in school while her parents and the cruel monster are behind custody.

Child rights activist Achyutha Rao said, “So many cases are getting reported and we are unable to stop many such marriages. That is really worrying.” She also remembered that it’s already the fourth case since January in the tribal belt of Devarakonda in Nalgonda district of Telangana. To witness our country still having these demonic practices, puts us into shame sometimes.