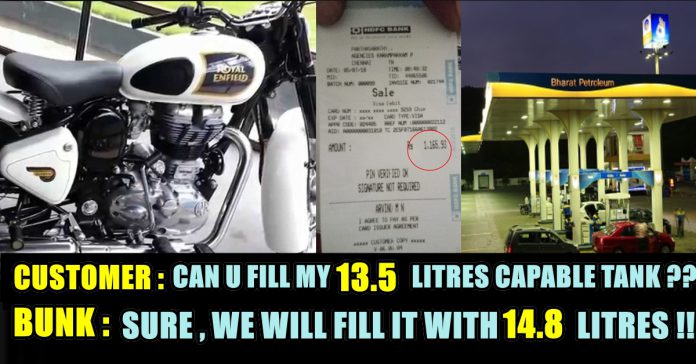 Arvind Nandakumar, 27, a graduate in B.Arch is an Architect by profession. He is residing in Vanagaram Ambatture road, Adayalampetu was heading to his office which is located in Kotturpuram today morning.

He owns a Royal Enfield bike through which he is going to his office in a daily basis. As he picked up his Bike from service yesterday, he wanted to check the mileage of the vehicle after a service which led him to fill his tank in Bharath Petroleum which is located in Karambakkam, Devi Nagar, Porur. While the Bunk employee filled his tank Arvind saw the digital indicator which showed him that 14.8 Litre of petrol was filled. As he was in work pressure and in a hurry , it did not struck his mind that his vehicle’s petrol tank is only capable of 13.5 litres maximum including reserve. He paid the bill amount of Rs. 1165 and drove away.

It is evident in the bill amount that the amount paid is Rs. 1165 and today’s petrol price in Chennai is Rs.78.57. Mathematically there are 14.7 litres of petrol was filled in a tank which is capable of 13.5 litre.

More than one litre of petrol money was collected from Arvind who feels that the one who is responsible for this must not get away with this. He also says that the worker rushed him to pay the money and he seemed a little bit tensed when Arvind asked to fill the tank. This bizarre stealing left us in a big shock wondering how many consumers are being fooled in day to day life and how much money they are making out of it.

Previous articleWhen Parents Are Not Home , Boy Rapes 8 Year Old Sister !! HORRIFIC !!
Next articleDreamed As A 8 Year Old Boy, Made It Real At His 88 !! This Indian Farmer Bought A Mercedes-Benz !!