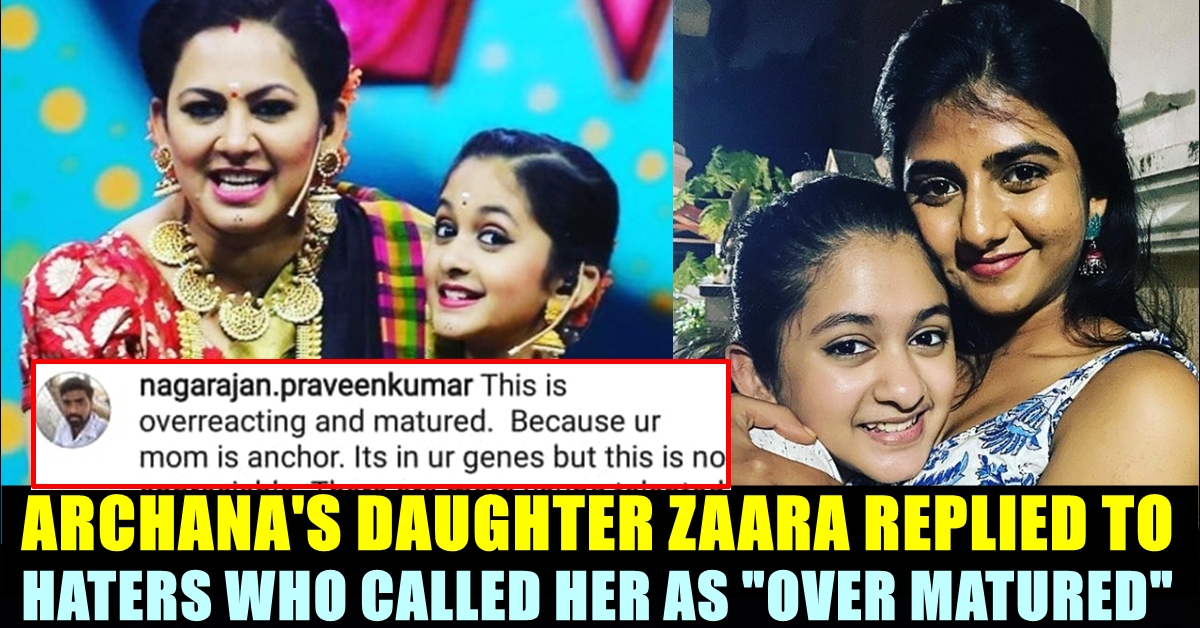 Bigg Boss fame Archana Chandhoke’s daughter Zaara came up with a video in her Instagram account replying to people who criticized her by calling her as “over matured”. In the video, we could see her lip syncing to a song which goes like “Oh baby, No baby, you got me all wrong baby”. However, her followers criticized her for uploading this video and she replied to them as well.

Archana Chandhoke, a TV host by profession, entered the Bigg Boss house as a wild card contestant. Initially, she was expected to play the game with the spontaneity which she used to have while hosting shows and interviewing celebrities. She who is hosting shows for past several years is also known for her humour sense. However, people started criticizing her after seeing her not behaving in the way they are expected.

The trolls and criticisms reflected in the comment section of the post uploaded by Zaara, daughter of the Bigg Boss participant. Zaara, while performing at “Bigg Boss Kondattam” along with her mother asked fans and followers not to use abusive words to vent out their emotions. On seeing her posts in social media, many started judging her and called her as “over matured”.

On seeing this video of the 13 year old, a follower said “This is overreacting and matured. Because ur mom is anchor. Its in ur genes but this is not appreciable. There are more young talented but they dont have a chance to prove it. Think it baby”

Replying to him, Zaara said “if you think it is, cant help it 😉😉”

Another user asked Zaara to get ready to go to school the next day and she replied to him saying that she doesn’t have school.

Earlier, when Archana got evicted from the Bigg Boss show, a follower asked Zaara not to get her mother’s character. “it’s my mother and you have no right to judge her. I am who I am! She is who she is! Stop damaging everyone’s character in the comment section! Get well soon! And GOD BLESS YOU! ” Zaara said in her reply to shut the Instagram user once and for all.

However, this is not the first time Zaara is giving back to haters through the photo/video posting social media platform as people are spewing hatred against her mother in the comment section of her every post. Archana got married to Vineeth Muthukrishnan on 7th of May, 2004. Archana posted many pictures with her daughter in her official Instagram account in which she enjoys 1 million plus followers as of now.