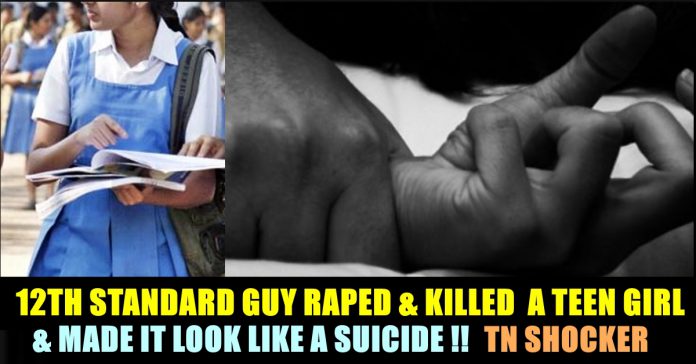 In a shocking incident, a teen guy raped and killed a 13 year old minor girl and was arrested by the Police officers.

Going by the reports of Indiaglitz , as it is summer holidays the girl was alone in nher house, and on April 15, as her parents went for work, the girl was assaulted by the teen guy who was allegedly. When her parents returned home at evening, they got shocked to see her dead with a current wire in her hand. After suspecting her death to be a murder, police from Vadamadurai took the girl’s body for postmortem.

The body was sent to government hospital morgue for an autopsy to find out whether she committed suicide by electrocuting herself.

Police solved the mystery behind the sexual assault and murder of a 12-year-old girl at Kurumpatti village near Vadamadurai in this district with the arrest of a teen-aged boy on Friday night. A special police team headed by Vedasandur Deputy Superintendent of Police Shivakumar, after a thorough investigation, arrested the teen-aged boy of the same village.

According to The New Indian Express, the Investigation revealed that the boy under the influence of alcohol sexually assaulted the girl, when she was alone in the house on the fateful day.  As the girl fainted, the culprit electrocuted her and made it look like a suicide. He was subsequently remanded to judicial custody.

Police sources said on Saturday that the girl, a class seven student was found lying unconscious with an electric wire stashed in her mouth in a suspicious manner in her house on April 16. Several injury marks were also found on the body.

Due to the protest by the girl’s parents to give appropriate punishment to the accused, Police have now arrested that class 12 student of committing the crime and he’s been jailed in Madurai central prison under Pocso act.

We all are aware about the person who is lending his voice for the Bigg Boss of Tamil version. After so many rumours and...

What started as a fun talk, ended up in murder and shook the entire state. We have seen fights between actors fans in social...

MA Sneha, a lawyer by profession, was brought up in a family that did not believe in caste or religion. She said she had...

According to a complaint filed at Vastrapur Police station in Ahmedabad, a 30-year-old man was allegedly attacked by residents of his apartment in Bodakdev...