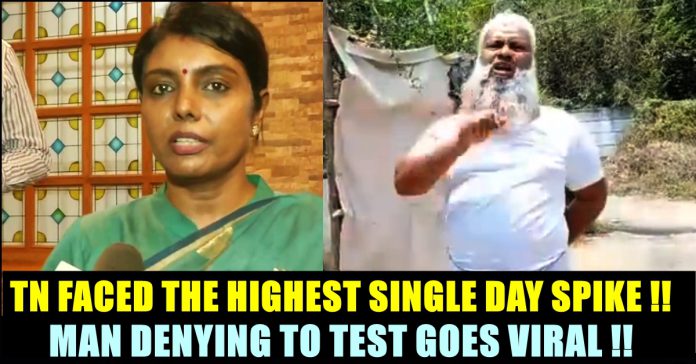 People of state Tamilnadu shocked as 110 new cases emerged in one day. It technically increased total positive cases of the state to 234. It is the largest single day spike in Tamilnadu so far. According to Health Secretary Bheela Rajesh, all the 110 people who showed positive are part of the conference that took place in Delhi, organised by Tablighi Jamaat, organised by an Islamic group.

State authorities asked the rest of the people who self declare themselves in order to save them and their families. as a result of it 1103 people came forward for tests. The patients who attended the conference belong to 19 districts across the state. The health secretary said that the new cases discovered only because of the participants came forward themselves.

“Since last night, people started to arrive hospitals as soon as government requested them to come forward. We have been working day and night” Bheela Rajesh said. Among the 110 people who were tested positive, 28 people are from Coimbatore, 17 people are from Dindigul and 20 people are from Theni. Madurai and Tirupathur saw 9 and 7 patients respectively. In Tirunelveli 6 patients discovered and in Chengalpet 7 patients discovered. Sivakangai, Tiruvarur, Tuticorin and Kanchi saw 5,2,2,2 patients respectively whereas Chennai, Karuru and Tiruvannamalai saw 1 patient each.

The state so far tested 2726 samples for the virus in which 234 people tested positive. “Using the efficiency of the containment plan, we will be able to fight this. Our full focus for the next two days will be on containment plan” Bheela Rajesh added.

This sudden increase shocked the people of Tamilnadu indeed which made them to react in social media platforms in various ways. This indeed created debates among two set of people in the micro blogging social media site. Meanwhile, a video of a person who allegedly attended the Delhi conference arguing with a man goes viral in social media.

In the video, the man can be heard saying that Modi himself could have infected by Corona as he visited 153 countries so far. “Why are keep on disturbing me by saying that I have Corona. Do anyone here have Corona?” he questions. The video was shared by BJP spokesperson SG Suryah.

Tamil Nadu person who attended Delhi #TablighiJamaat Conference when Health Officials went to #CoronaTest asks them to go & check Modi first since he travelled to 100+ countries.

Comment your views on this largest single day spike in the state !!

Previous articleChina Started Making Money Out Of COVID 19 Across The World !! WATCH
Next articleMinister Vijaya Bhaskar Sidelined By Senior Leaders Of His Party ?? Here’s His Last Tweet

On Sunday, a poll of Democracy Network and Ungal Kural said that the AIADMK led alliance has an edge over the DMK alliance due...