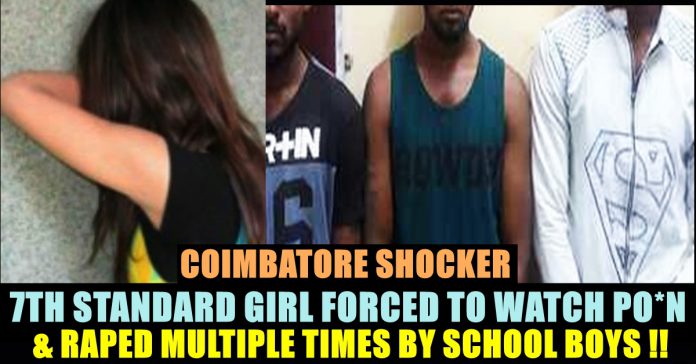 Despite the struggle caused by the Coronavirus across the country, many felt grateful to the disease as the number of crimes reduced in the country since the pandemic. The number of crimes such as harassment against women, murders and theft cases reported in a less number comparing to normal days, according to reports. Country India is under lockdown for nearly straight 90 days, result of which many cases of domestic violence against women reported to Police officials. Now, to our shock, a horrific rape case has been reported in the Coimbatore city and shook the public as the victim of this case is a 11 year old girl.

A class 7 studying girl student forced to watch obscene videos and raped multiple times by minor boys in the Sundarapuram locality near Coimbatore city. Police registered an offence of sexual assault against the three accused and produced two of them before a juvenile justice board on Saturday. The third accused has absconded and the efforts to nab him are on.

Chithra (name changed) lives in a rented home in Sundarapuram locality in Coimbatore with her Father and Aunt, as her mother passed away few years ago. Both of them are working and Chithra, to kill boredom, used to go to her house owner’s place to watch Television often. The house owner stays in the ground floor, says reports.

A 16 year old boy Rajesh(name changed), son of the house owner is also living with his family in the ground floor. Rajesh who is studying 10th standard in a private school is often left alone in his house as his parents are also working. To attend online classes, he was provided a smartphone by his parents. Sajith (name changed) a 17 year old boy is a frequent visitor to Rajesh’s house as they both are friends.

On 20th of May, when Chithra entered her house owner’s place to watch tv, she witnessed Rajesh and Sajith watching obscene videos in the mobile phone given to Rajesh by her parents. When she tried to leave the place immediately, Chithra was forced by the two boys to watch the video. However, she managed to reach her house in the first floor.

The two minor accused, allegedly followed her to barged into her house. She was raped multiple times by the two minors, in her house. Later, they also called another friend named as Kumar who is also a student and the three accused forced the girl to watch obscene videos and visited her house frequently over the next week to sexually assault her. The report further suggests that the three accused threatened the victim not to disclose about the incident to anyone.

When Chithra suffered stomach ache a few days ago, she was accompanied to hospital by her father. The incident came to light only when she was taken to medical examination by the Doctor. During her interaction with Doctor, the 11 year old child informed the doctor about the heinous act of her landlord’s son and his two friends. Doctor, immediately called All-women police station and reported about Chithra’s state. A case under sections 5 and 6 of the POCSO act has been registered against the accused. Rajesh and Sajith were arrested by the police officials and Kumar is expected to be arrested soon.

WATCH : Arnav Released Private Videos Of Dhivya Arguing With Him !!

A video that shows television actress Dhivya verbally attacking Arnav, seemingly in their house got surfaced in internet and it was uploaded by Arnav...