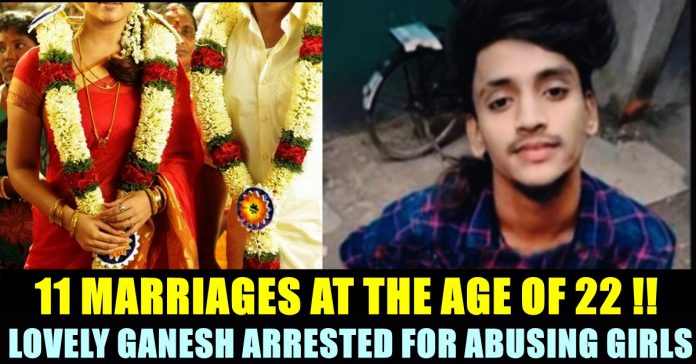 11 Marriages At The Age Of 22 ?? Villivakkam Lovely Ganesh Got Arrested !!

A youth named Lovely Ganesh got arrested by Chennai Police after cheating 11 women in the pretext of marriage, reports emerged. After marrying a 20 year old girl, he reportedly harassed her since the first evening of their marriage. The girl who escaped from him with the help of their house owner, managed to complaint in the nearby Police station. Police who found bruises in her body, arrested Ganesh and filed six cases against him under the relevant sections of Indian Penal Code. Ganesh, reportedly filmed obscene videos of the women he married and sexually harassed them with his friends, Polimer reported.

A 20 year old woman who belongs to Kolathur, Chennai became friends with Ganesh through Facebook. They both connected with each other through the social media platform in the year 2017 and fell in love. On 5th December 2020, Ganesh tied knot to the girl in an isolated place and made her his wife without the knowledge of their parents.

Parents of the girl, registered a Police complaint after knowing about the incident. When Police investigated the case, the girl said that she wants to lead a marriage life with Ganesh. Police, after knowing that she is an adult, permitted her to live with him.

In Rajaji Nagar of Villivakkam, the duo rented a house and lived together as husband and wife. On the first evening of their marriage, Ganesh brought a 17 year old girl to their house and said that she is their maid. He started having physical relationship with her on the very day, according to the report.

When the wife questioned him for his behaviour, Ganesh locked her in a room and tortured her physically. He also threatened to kill her if she reveals about anything that happened inside the house. After consuming alcohol, Ganesh sexually harassed her by tying her hands with ropes and gagging her mouth with clothes.

When the girl said that she wanted to see her parents, Ganesh pretended like consoling her and made her drink alcohol. He also forced her to have physical relationship with the 17 year old girl and his friends. After recording the whole incident in his cell phone, he sent it to his friends.

While torturing her physically, Ganesh confessed that he married 11 girls so far and showed her their obscene videos before behaving like a psychopath. He brutally attacked the wife and caused bruises on her body. Dejected wife, narrated the ordeal to the house owners and reached her home with the help of them.

Parents of the girl filed a case in Villivakkam all women Police station. Responding to the complaint, Police registered a case and arrested Ganesh to investigate him. After confiscating his cell phone, officials are investigating about the obscene videos in it and about the people who are linked to the heinous crime. Including The Protection of Children from Sexual Offences, Ganesh was arrested under six sections of IPC.

When DK Made Umpire To Talk In His Mother Tongue !!

Dinesh karthik who made headlines for talking in Tamil while representing Kolkata Knight riders, now made umpire Chettithody Shamshuddin to talk in his mother...