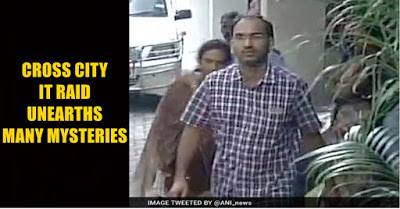 100 KG Gold and 90 Crores Cash Seized After A Cross City Raid In Chennai.

Income tax investigation across the city in over 8 places has led to the IT Department seizing over Rupees 90 Crores cash and 100 KG of gold.

“The premises belong to industrialist Shekhar Reddy, his associate Srinivasa Reddy and their agents including one Prem,” said an IT official.

Of the total amount seized 80 crores were in older denominations and 10 crore was in the new 2000 denomination notes. How the group got their hands on such a huge amount of the new 2000 rupee note is still a mystery.

The officials got a tip off about Prem exchanging old currencies for gold bars. Eventually the trail led to the Reddy duo hauling a huge junk of money. They also got Rupees 6 crore in 2000 denominations from the house of Shekhar Reddy in T Nagar.

Based on the information provided by him, officials raided a room in a prominent star hotel in Teynampet and seized 70kg gold bars from there. Reddys had booked the room in the name of one of their agents.

Shekhar Reddy who was involved in legal sand quarrying in various parts of the state is also a member of the Tirumala Tirupati Devasthanam Trust. Reddy had visited Apollo Hospital on October 12 to hand over Tirupati ‘prasadam’ to former chief minister J Jayalalithaa who was admitted there then.

Previous articleThe Reason Why Jayalalitha Was Buried Rather Than Be Cremated.
Next articleDiscount On Petrol And Diesel Prices And More. Read Below.