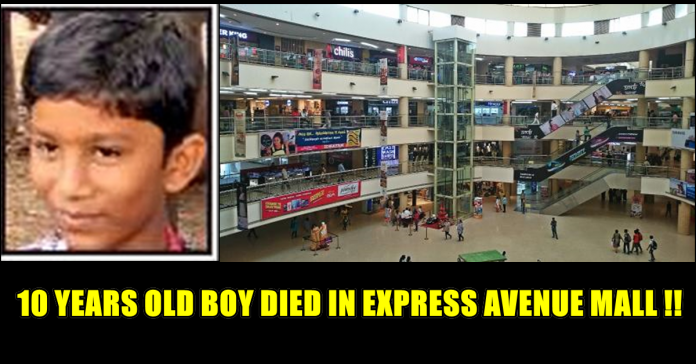 A 10-year-old boy died on Saturday of severe head injuries sustained four days earlier, when his school bag snagged in the moving handrail of an escalator in Express Avenue mall on Tuesday evening, throwing him off the second floor and to the ground 25ft below.
The police on Sunday said S Naveen, a Class V student, died in Rajiv Gandhi Government General Hospital, where doctors at Royapettah government hospital had referred him when his condition deteriorated.

According to the FIR copy filed by the police, Naveen’s bag got caught on the escalator and he was flung down with great force. His family has now blamed the mall and its lack of safety measures for the child’s death. The Anna Salai police said they learned of the accident only on Saturday evening, when Naveen’s father, R Sanil Kumar, 44, an autorickshaw driver from Korukkupet, lodged a complaint against the mall’s safety manager.

Sanil Kumar accused the mall authorities of laxity, saying there was no security guard in the vicinity to prevent the accident. He said no employee or administrator offered to help get medical assistance for the injured boy.

Sanil Kumar said his eldest daughter, Geetha, 22, who was visiting from Madurai, had taken her younger siblings, Naveen and Divyashree, eight, to Express Avenue when the accident took place at 5.30pm.He has asked for action to be taken against the Safety Manager at the mall for his son’s death. The police however have filed the case under section 304(A) which is accidental death.

“The mall was bustling at the time, like most evenings,” Sanil Kumar told TOI. “Geetha had taken the children to play games and buy toys at the mall.”

“Witnesses said someone shouted out to the boy, telling him to free himself from the bag, but he held on tightly,” the officer said. “He hit the side of the escalator railing and fell around 24ft to the ground floor.”

Customers at the mall helped Geetha take her brother to a private hospital and then to Government Royapettah Hospital. Doctors had Naveen moved to Rajiv Gandhi Government General Hospital, where he battled for life in an ICU for three days before he died on Saturday evening.

Speaking to TNM, an investigating officer said, “The incident happened when the child was standing on the escalator. It is clearly a freak accident. How can we blame the mall for something like this? Thousands of people take that escalator every single day. When something like this suddenly happens, what can we do? There is nothing that the mall could have done.” He further placed the onus of the safety of children near escalators on their parents and guardians.

“When you are taking children with you on the escalator you have to ensure that you have an eye on them at all times and that you keep them safe,” he said.

The Anna Salai police registered a case under IPC Section 304 (a) (causing death by negligence).

Previous articleH.Raja Has Made A Cheap Statement Against Asifa. You’ll Go Mad At Him After Reading His Statement!!
Next articleBREAKING : “I Can Be Raped Or Killed” The Lawyer Of Asifa’s Case Fears For Her Life !!

“I Can’t Believe You” Popular Film Producer On Prashanth’s Accusation Against DMK !!

After seeing the accusation of movie reviewer Prashanth against the DMK party, popular movie producer Dhananjayan who is known for producing films such as...