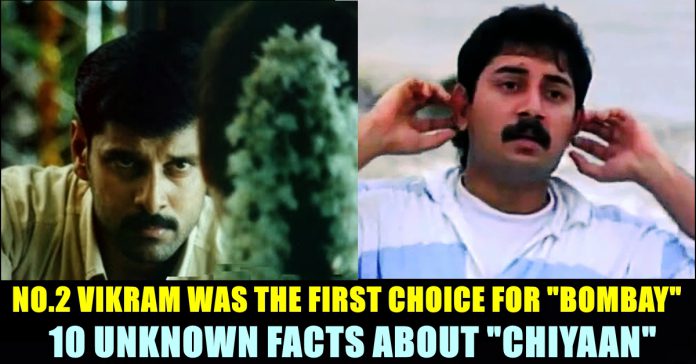 Vikram (born Kennedy John Victor; 17 April 1966), also known as Chiyaan Vikram,  has been part of numerous commercially successful films and has earned major critical acclaim for many of his performances. During his years in the Indian film industry, he has won five Filmfare Awards as well as one National Film Award for Best Actor.

Vikram has always been about the jokes and high spirits and anecdotes that can really punch up a conversation. Like the one about how he ended up with that name. His parents—J Albert Victor and Rajeswari—named him Kennedy and called him Kenny. He hated the name, even if he had to admit that it was better than the one his ambitious grandfather had in mind: “Astronaut”. At some point, realising that if he wanted a name he liked, he’d have to come up with it himself, he took VI from his father’s name, K from Kennedy, RA from his mother’s, and RAM from his sun sign, Aries. A screen name was born. Vikram was supposed to act and even filmed for a few scenes for Mani Ratnam’s Bombay, but couldn’t continue filming because he couldn’t shave off his beard, which he maintained for another movie. He later appeared in Mani Ratnam’s movie called Raavanan which was a bilingual. Vikram started his career by modelling and acting in some serials. He has acted in a large number of Malayalam and Telugu movies. Vikram is married to Shailaja from Kerala when he was in crutches following three years of being bed-ridden after his broken leg in the year 1980. The pair got married in Guruvayoor and they also had a wedding ceremony in a church near Loyola College. He has played supporting roles, done playback singing and has dubbed for many actors. He dubbed for Prabhu Deva in Shankar’s Kathalan movie and also dubbed for a character role in Kamal Haasan’s Kuruthipunal and for Abbas in Kandukondein Kandukondein. His movie Ravanan which was directed by Manirathnam was the first Indian film to be dubbed in Germany. 7. Vikram’s Father was also an actor Vikram struggled for seven years to get recognised in the cinema industry. He found fame as a print model but failed to secure any movie roles. He went on to do an English degree at Loyola college, alongside Arvind Swamy, Telugu star Venkatesh and his favourite director, Dharani. Previous articleNow, Delhi Girl Accused Her Parents In A Rape Case : Its Disheartening What The Parents Did !!
Next articleDon’t Hashtag As #Foodie In Your Next Post , If You Cannot Identify Any One Of These Briyanis !!

A video of A.R Rahman leaving the stage after expressing his shock over the anchor using Hindi language to welcome the protagonist of his...