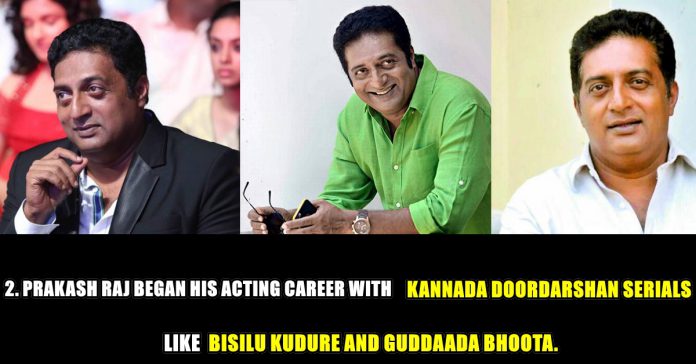 10 Unknown Facts About Prakash Raj That’ll Make All Of Us Go WoW!

Prakash Raj is definitely a multi-talented actor who can play negative roles with utter perfection and can live in family characters with so much ease. He can play a person’s father, brother, friend and also an enemy with so much versatility that we never want his presence to go off the screen. Here are some interesting facts about this man.

1. Prakash Raj is a polyglot who can handle Tulu, Kannada, Tamil, Telugu, Marathi, Hindi and Malayalam. 3. He later took up small supporting roles in kannada films like Raamachari, Nishkarsha, Lockup Death and etc and was noticed for his dialogue delivery and histrionics. His breakthrough role came in form of Harakeya Kuri starring Vishnuvardhan and Geetha, directed by K S L Swamy. 5. Prakash Raj has been a very ardent theater fan and has over 2,000 street theater performances to his credit. His first theatre performance happened when he was in Class 7. 6. His production house – Duet Movies – is named after his first movie in Tamil. 7.He owns a zero pesticide organic farm in Hyderabad. 9.He also played some famous roles in Hindi films and got strong recognition throughout the nation including the Salman Khan-starrer, Wanted. 10. Prakash Raj is an avid reader. During his leisure time, he is usually seen with a book. Previous articleNayanthara To Act As Mother-In-Law For Keerthy Suresh In Her Next Movie? Wtf!
Next articleVijay Mallaya To Get Married For The Third Time In London : Here’s The Full Details !!