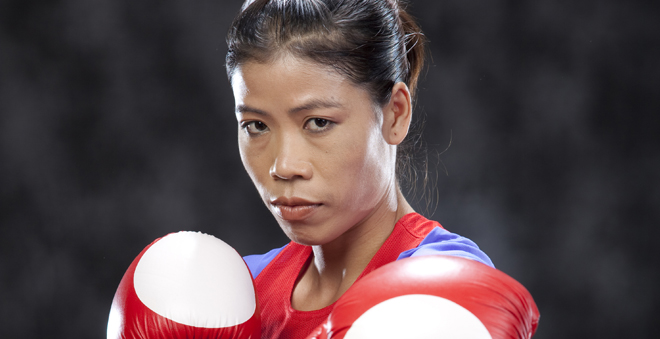 It’s her indomitable spirit that made her a true fighter. It’s her diligent striving to overcome every hurdle life has thrown at her. It’s her passion for life that has made her turn impossible into possible. How else otherwise a girl from an unheard village of Manipur in India could have made it to the Olympics? From a poverty-stricken childhood to making it to the Forbes list of top 100 celebrities in India and a Bollywood film on her life, it certainly has not been a cake walk for the 5 times international boxing champion. But her unmatched determination to not giving up did not let any pessimism come in her way of success.
Here are 10 unknown facts about Mary Kom which will make you believe in your dreams again
1. A high school dropout: Yes, this boxing superstar could not complete her high school education for her increasing passion for boxing. But, later, she finished her schooling through alternative ways and even completed her graduation.
2. Came to boxing after college: Believe it or not, she took boxing seriously only after graduation. It’s Dingko Singh’s winning gold medal in 1997 Asian Games that became a life-changing inspiration for Mary Kom.
3. Initially discouraged by family: She faced the first obstacle from nobody else but her own orthodox family who could not support the idea of their daughter taking part in an unconventional sport as it was not considered as a “women’s game”. Even, when the news of her first win came into local newspaper, her father who used to work as a poor landless farmer, scolded her vehemently.
4. Proper training after winning Asian games: Surprise again! This internationally recognized boxer could afford to start with proper training from her idol, Dingko Singh after he won at 1988 Asian Games.
5. Won silver at her first tournament: But as nothing can suppress a true gem, this wonder-woman made her debut in 2001 Women’s World Amateur Boxing Championship in Pennsylvania, USA and won a silver medal. In 2002, she achieved goal in the same AIBA championship in Antalya, Turkey.
6. 5 times AIBA champion: And then she made it a habit to win gold medals at the AIBA championship in senior boxing. Till now, she has been the proud winner of 5 gold medals. In 2008, it’s this brilliant performance and consistency that earned her the prestigious title of ‘Magnificent Mary’
7. Continued boxing after becoming a mother of two: Yes, what is otherwise unthinkable for many, she has made it happen. Kudos to her unbreakable spirit!
8. Govt. recognitions: For her outstanding achievements and an inspiring life, Mary Kom has received a lot of govt. accolades. From Arjuna Award to Padma Shree, from Rajiv Gandhi Khel Ratna Award to having a road named after her, her bag is full of recognitions and awards.
9. Entry to Olympics: In 2012 Summer Olympics, she was the only female boxer from India to get a chance to participate in the tournament after her success in 2012 AIBA championship.
10. An academy of her own: To encourage and help thousands of Mary Koms in achieving their dreams in boxing, this real life fighter has founded her own MC Mary Kom Boxing Academy in her home state. And to make sure that poverty should not come between an aspiring boxer and her dreams, she has been giving free training to numerous underprivileged girls since 2007.
So, never stop dreaming under any circumstances. Only you can change your fate.