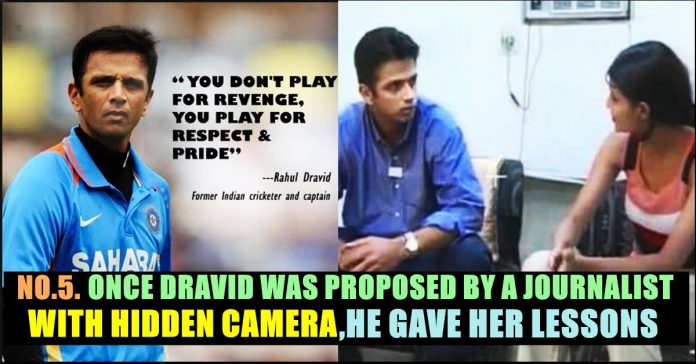 The iconic former Indian cricket captain and Karnataka batsman Rahul Dravid turned 46 today. Probably, the last batsman of the classic mould, Dravid scored 13288 runs in 164 Tests at an outstanding average of 52.31 with the help of a whopping 36 centuries and 63 fifties. Wait! That is not all! Along with this, he also scored an amazing 10,889 runs from 344 ODIs at an average of 39.16 with the help of 12 centuries and 83 fifties – remember, he was a specialist Test batsman and yet managed to establish himself in India’s ODI team! He was a constant figure at number 3 for India in the late 90s and through the first decade of 21st century.

As Indian batting stalwart Rahul Dravid, also known as “The Wall” of Indian cricket, is celebrating his 46th birthday today,  many wishes pouring in for the man who, it is universally agreed, is a gentleman both on and off the field, the sweetest comes from Virender Sehwag.

Deewaron ke bhi kaan hote hain , is deewar ka bahut saaf Mann aur hriday bhi hai!( #TheWall too has ears, this one has a pure mind and a heart as well)
A joy to have played with him and made so many wonderful memories together #HappyBirthdayRahulDravid ! pic.twitter.com/eukPvSx0II

Other than him so many young players also wished the legend on his birthday :

Happy Birthday Rahul Sir.
Hope you have the best day and year ahead filled with happiness 🤗#Rahuldravid #thewall pic.twitter.com/TyIJoQTSHL

Happy birthday Rahulbhai! Wish you a fantastic year ahead and loads of happiness! #HappyBirthdayRahulDravid

On this special day of him know some of the unknown facts of the great player :

Dravid’s father used to work at the Kissan factory which makes Jams, which has earned Dravid the nickname ‘Jammy’. Dravid has also starred in an advertisement for Kissan.

Rahul Dravid is also the only cricketer to have scored a century in each test playing nation. He achieved this stunning feat with a century against Bangladesh at Chittagong in 2004.

Dravid was voted the sexiest sports personality in India in an online survey (2004-05). He left the likes of Yuvraj Singh and Sania Mirza behind.

Dravid is the only ever player in cricket history to have made his debut and retired in the same match. He made 31 off 21 in his T20 debut against England in the summer of 2011.

One might know him as ‘The Wall’ or ‘Mr. Dependable’, but the ace cricketer also goes by the nickname ‘Jammy’.

Rahul Dravid has been a class act on and off the field. He is often regarded as one of the best to have donned the Indian jersey. Check out an old video of Dravid presenting himself with composure and respect and not letting his guard down while being ‘proposed’ by a woman fan is giving ‘decency lessons’ on how cricket stars should ‘behave’ with female fans.

Well Hardik Pandya incident reminded me of a young Rahul Dravid who was bullied in MTV Bakra and how well he responded to it. You always can set the right example if you have it in you. Must watch! pic.twitter.com/5X4Py9LvR9

Dravid played hockey before he took to cricket. With a natural flair for the sport, Dravid was selected for Karnataka’s junior state team.

Glenn McGrath once famously said that if there was one Indian cricketer who could earn a direct entry into the great Australian side of the late 90s, it would be Rahul Dravid.

Dravid was the top scorer in the seventh ODI World Cup in England in 1999, with 461 runs, a perfect response to people who kept insisting he was a test match batsman.

On March 9 in 2012, Rahul Dravid bid adieu to Test cricket, leaving a huge void in Indian batting order that has arguably, been filled by Cheteshwar Pujara now. let us wish the living legend a hearty wishes for his birthday !!