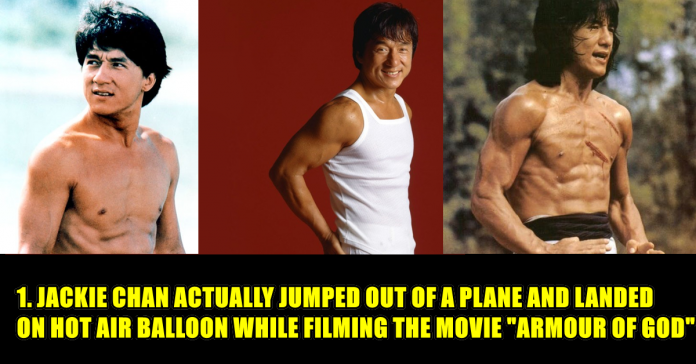 10 Interesting Unknown Facts About Jackie Chan That Will Amaze You !!

10. Plastic Plug In The Skull

Jackie Chan has a permanent plastic plug in his skull due to an accident that he sustained while filming Armour of God. 9. Most Credits In One Movie

Jackie Chan was awarded two Guinness World Records for the 2012 movie Chinese Zodiac: one for “Most Stunts Performed by a Living Actor” and one for “Most Credits in One Movie”. He had 15 credits in that movie. It is possible to train a fish, and Jackie Chan taught a catfish tricks in Mandarin and English. That’s our wantonly talented Jackie. We already know that he was strictly brought up in a boarding school where no academic lessons were given. His rigorous childhood training made a master singer out of him and since 1984, he has churned out 20 albums featuring his song. While filming for ‘Wheels on Meals’ in 1984, Jackie became angry on being painfully hurt by Benny ‘The Jet’ Urquidez (a kickboxing world champion) while shooting a fight scene with him. Jackie, by-the-way had landed a few blows on the boxer as well. Furious and frustrated Jackie challenge Urquidez for a real exhibition match and since Jackie was not much of a kickboxer himself, Urquidez warned him saying he’d get hurt. Soon the crew members began taking sides and placing bets but unfortunately for them, the exhibition match never happened. Letting by-gones be by-gones, Jackie and Urquidez appeared again in a fight scene of the film ‘Dragons Forever’ (1988). 4. Jackie’s Son Gets None Of his Money

Jackie Chan’s son will get none of his $130 Million fortune. According to him, “If he is capable, he can make his own money. If he is not, then he will just be wasting my money.” Jackie Chan got the name Jackie while he was working as a construction worker in Canberra, Australia. His real name is Chan Kong-Sang Jackie Chan actually began his film career as a stuntman in the Bruce Lee films, Fist of Fury and Enter the Dragon. Jackie Chan actually jumped out of a plane and landed on top of hot air balloon while filming the movie, Armour of God. Previous articlePolice Arrested A Gang Of 9 For Smuggling : The Amount Of Marijuana They Handled Is Unbelievable !!
Next articleVirat Announces That He Will Walk Around Shirtless In Oxford Street If India Win The 2019 World Cup : Sensational !!