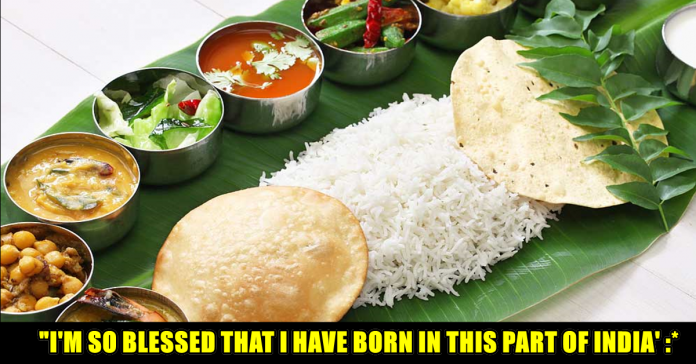 10 Dishes That Will Make Feel Blessed For Being A South Indian !!

admin
August 22, 2015
Share
Facebook
Twitter
Pinterest
WhatsApp
South Indian dishes are not just mouth-watering; they can be eye watering as well, since they are the hottest of all the Indian food. Rice with gravy is one of the staple foods in most parts of the region, which go down well with poppadums, chutneys, fried non-vegetarian items or dry cooked vegetables. Ragi, jowar and bajra are also extensively used in some places. It is very difficult to pick top dishes from the huge list of exotic recipes but here I try.

Tamarind rice is a quick fix meal for busy people and loved by many south Indians, especially if they have to pack a meal in the lunch box. It is also a must dish to be prepared during festivals like Ganesh Chaturthi or Diwali and is served in temples. Traditionally it is prepared with steamed or boiled rice which is garnished with tamarind juice, peanuts, red chili, curry leaves, coriander leaves, grated coconut, jaggery, pepper, mustard seeds, fenugreek, turmeric, asafoetida, blackgram and cumin.

Chettinad chicken is a scrumptious, spicy and aromatic curry with fiery taste of chilies which goes well with rice, roti, idli or dosa. If you are preparing the recipe at home, you can reduce the amount of chili to make it less hot.  The cuisine is famous for its rare spicy combination which includes dried flower pods, black stone flower, bay leaf and many more.

Appam, which has an anglicized name Hopper, is delicious flat lacy pancake prepared from fermented batter of coconut milk and rice. Appam with a crisp side and an airy soft fluffy center,  is much loved dish among the people of Tamil Nadu, Kerala and also the neighboring country Sri Lanka, who cherish it as much for breakfast as for dinner. It is simple to prepare and can be eaten with your favorite gravy or coconut milk.

The vada with a hole in center has been one of the hot favorites of south Indians not just as an everyday cuisine, but also on the days of celebrations and festivities. The crisp on top but soft inside vadas were the great ancestors of doughnuts who have imitated their shape. Though they are prepared at homes, they are as much famous as street food, available in canteens, railway station, bus-stand and busy areas all throughout the day. Just watch out for those calories when you gobble up the vadas.

Fish is the staple food of the people of Kerala due to its vast shoreline. The Malabar fish curry, which has its roots in China, is appetizing gravy which goes down well with rice, tapioca or bread. Although there are many variations of this curry, the basic ingredients that are the red chili, coconut and fish are constant with all varieties.  This dish has caught fancy of many people outside India, so much that the dish is produced in large quantities, processed and packaged in cans and flexible pouches to be sold in India and abroad.

Rasam is a mandatory part of south Indian meals. It is scrumptious pungent soup prepared with tamarind pulp as its main ingredient which is then mixed with various spices, finally to be tempered with mustard and curry leaves. It is both consumed with rice or separately as a soup. It is the most fluid of the all gravies prepared in India and is known to be an amazing digestive aid.

The lip smacking Hyderabadi Biryani is a perfect blend of Mughlai and Andhra Pradesh cuisine which was born in the kitchens of the food loving Nawabs. Prepared with aromatic, silky basmati rice and lamb/ chicken meat, it is a trademark recipe of Muslim weddings and festivals. The two famous variants of Hyderabadi biryani are the Kachchi gosht ki biryani and pakki biryani. Today the most pampered, fragrant and delicious meal accompanied by salad, Dahi Chutney, curry and roasted eggpant is considered the best pot meal of India.

A steaming upma is the best way to begin a day. Adding to the magic, they do well as snacks, brunch or can substitute even a meal. Cooked with semolina and aromatic seasoning, upma can be prepared in different ways to adjust its taste according to your choice. You can add nourishing vegetables like beans, peas, carrots and many more, to make them healthier and more nutritious. The different varieties of upma include bread upma, aval upma,wheat upma and idli upma.

The thin crispy dosa, stuffed with potatoes, fried onions and aromatic spices, served with chutney and sambhar is the gift of Udupi hotels to the world. Today, Masala Dosa is ranked 39th among the world’s most delicious foods according to the list compiled by CNN. It is also considered one of the most romantic snacks which are shared by lovers in a cozy restaurant.

The most popular among South-Indian dishes, Idlis are fluffy and savory rice/lentils cakes which are the healthy breakfast and snacks. They are fermented before steam cooking, which makes it easy to metabolize in the body which makes them a good nutritious choice for breakfast, moreover they do not put calories on your hip like many other quick fix recipes. They taste delectable with steaming Sāmbhar and coconut chutney.

Director Vignesh Shivan responded to the controversy about himself and his wife Nayanthara violating the rules in Thiruppathi temple. Writing an apology letter, the...