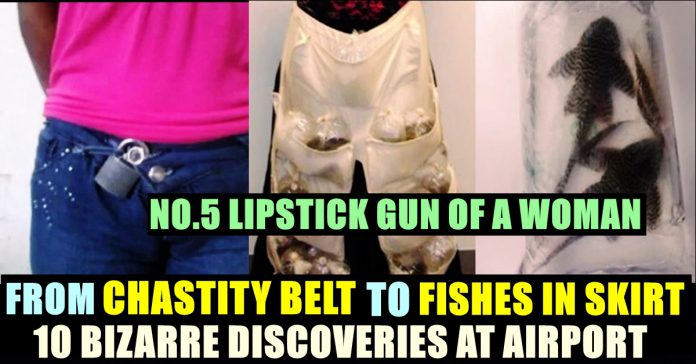 Due to the COVID 19 pandemic, almost no airports are completely functioning across the world. Those who have traveled in flight would have faced a situation in airport where they have to handover their baggages for “Check-In” prior entering the flight for travel. The duration of Check-in spans from 15 minutes to 2 hours depending on the destination and airline. Now let us have a look at some of the strangest things that have been discovered at Airport Check-ins by the securities.

A Man with body full of iPhones :

In this news which was reported in the year 2007, a man flying to Hartsfield Jackson-Atlanta airport from South Korea, was caught with 30 dead snakes in jars and bottles packed. The man’s intention behind this strange activity is still unknown but he was fined $800 by the The U.S Fish and wildlife service.

An 18th century cannonball, pulled from an old shipwreck. Some of them had the potential to explode, authorities believed at that time. A diver with no malicious intent was the one who is responsible for this incident which happened in the year 2012. Securities who believed that it is extremely dangerous, were forced to evacuate 300 passengers from the plane.

On many occasions gold bars were found in planes, especially in the planes which has connections to India as the country happens to be the world’s largest gold consumer and gold smuggling is very common here. Customs officials recovered 10 gold bars totally weighing 1.2 kg worth Rs 33.32 lakh, hidden in the toilet of an Air India flight that arrived from Abu Dhabi in the year 2018. In the year 2013, A cleaning crew member has found gold in the toilet of a plane belonging to an Indian airline. The 24 gold bars were found stashed in the aircraft’s toilet compartment. The plane belonged to Jet Airways and was being cleaned at the Kolkata airport.

In 2005, a woman charged for smugglish fish in skirt. This incident happened at the Melbourne International airport and the woman arrived there from Singapore. Securities found 51 live tropical fish hidden in a specially designed apron under her skirt. She was caught as authorities heard “Flippy”noises coming from the vicinity of her waist. During investigation, it was revealed that 15 plastic water filled bags holding fish concealed inside a purpose-build apron.

On this incident which was reported in the year 2018, a woman tried to smuggle this bedzadelled, 3,50,000-volt lipstick stun gun in a carry-on bag at the San Diego International Airport.

A skull-decorated knife gun was found in a passenger’s carry on bag at the Denver International Airport. One can bring guns and knives in place but only in the checked baggage. Even toy guns and plastic swords are not allowed into the cabin.

A 40 year old woman panicked the Athens Airport in the year 2004 with a chastity belt she was wearing. The securities stopped her when the metal detector started beeping while checking her. The British woman told police officers that her husband forced her to wear the belt to make sure she had no extra marital affair during her brief visit to Greece. The woman was allowed to fly on the plane to London.

An eight-year-old Ivorian boy smuggled into Spain from Morocco inside a suitcase http://t.co/y3bbe1ZVuT pic.twitter.com/D9PnaXZuop

An 8 year Ivorian old boy was found in a suitcase in the year 2015 at Spain. That flight arrived from Morocco.

In the year 2012, Security officers at the Amsterdam airport found over 200 live tarantulas in the luggage of a German couple. Customs official at Schipol airport noticed the spiders during a routine baggage scan. Along with the 200 tarantulas- grasshoppers, millipedes and beetles were also found. The intention of the couple is not known.