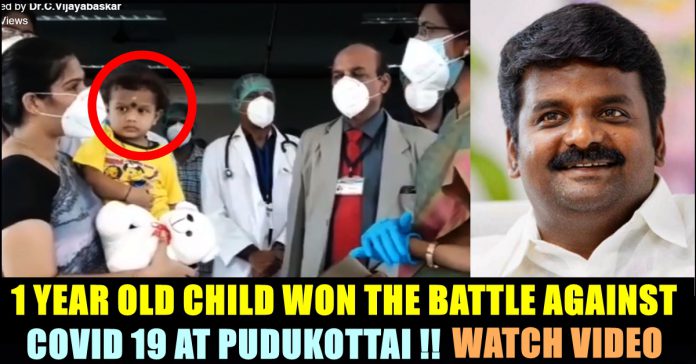 On Thursday, an 18 month old infant recovered from COVID 19 at the Government Ranees hospital and was discharged on Thursday. Minister Vijaya Bhaskar happily shared the video in his official facebook account. Doctors made sure that the child’s mother, who was staying with him, didn’t get infected by the COVID 19.

P Uma Maheshwari, collector of Pudukottai district, gave the child doll in person to give him a send off in the presence of medial staff. On May 18, the parents returned to Manthakollai village in Pudukottai district after working in Maharashtra as construction labourers. The parents of the child tested negative when on May 20 but the child’s result showed positive unfortunately. As he was having difficulty in breathing, he was admitted in the ICU of government Ranees hospital.

The medical team examined the child and found heavy breathing due to lung infection and lowering oxygen saturation levels. Chief Doctor C Babu Anand, paediatricians Doctor SV Inkarsal and Doctor S Vairamani who treated the child, said that the child required respiratory support. Knowing that it could worsen the condition, they chose high flow oxygen therapy in which oxygen was given at a high flow to fill up the lungs to improve oxygen saturation.

The child was given anti virus drugs and immune boosters and shifted out of ICU after 2 days of treatment. When he was tested again on Wednesday, his result showed negative. “It was crucial to have the mother close to the child and prevent her from getting infected. The child was too young to manage on his own. Therefore, we ensured that the mother stayed with the child with personal protective equipment, N-95 mask and gloves” said Doctor A L Meenakshi Sundharam, dean of Government medical college.

Minister Vijaya Bhaskar shared the video in his official twitter account with a caption saying “A 1 1/2 year old child recovered from #Covid19 at #Pudukottai. Appreciate the treating team and the authorities.”

Previous articleKushboo Lashed Out At Her Followers !!
Next article“Nivin Was Not My First Choice” – Alphonse Putharen Opens