Trinamool MP Mahua Moitra’s “voice of dissent” has found admirers in many quarters across the country. The opposition looked feeble after the thumping victory of Narendra Modi-led UPA government. Now, all of a sudden, there is someone on the left side of the honourable speaker. There is someone who is going to ask uncomfortable questions to the government.

Moitra broke the Internet with her maiden speech at the Lok Sabha on June 25. Her speech had quotes from Maulana Abul Kalam Azad to Ramdhari Singh Dinkar. Moitra later told the BBC that it was her job to “highlight the failings of the government”. Now a recent video of her interacting with journalist Arnab Goswami is going viral across the Internet. If there was a poll, Arnab Goswami could easily be one of the most hated anchors by the speakers he invites on his show on Times Now. He has been called a liar and an ignoramus by Bharatiya Janata Party’s Subramanian Swamy, many have left the show midway, not answering his questions, and who can forget the ‘never ever’ debate that the anchor had with Meenakshi Lekhi. The clip in question is a part of the January 5 episode of The News Hour debate with Arnab Goswami on Times Now. The episode took place in 2015. Moitra was among the three panelists who were debating on the attempt to murder charge against the man who slapped Abhishek Banerjee, Mamata Banerjee’s nephew. 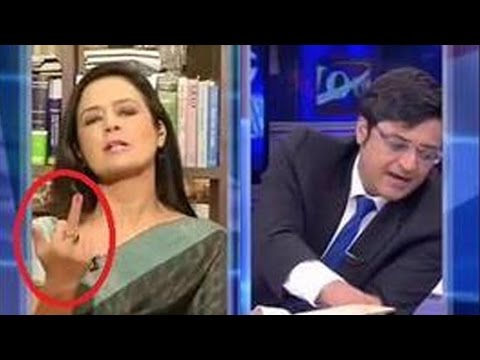 The video shows, Arnab who is not letting Moitra to utter a word, keeps on insisting her to answer the question. When Moitra asks for him to keep quiet for at least 30 seconds, Arnab kept talking to which Moitra got frustrated and showed him a middle finger and said “You know Arnab, just keep talking. This is a one man show…just keep talking”

Check out to know how people in the internet seeing the video now :

@ArnabGoswamiRtv the most dumb & irrational #Journo in #country.

Middle Finger to Arnab on his very own show. 😂😂😂

Knew Mahua Moitra can kick ass since that time she showed the finger to Arnab Goswami on Newshour. pic.twitter.com/rd0ui1c8iL