Social media users trying to interact with their favourite people whom they don’t know personally is common now a days. This user went one step ahead and asked Vaishnavi Prasad, one of the participant in the second season of Tamil Bigg Boss show, to take care of his/her pet as he is leaving the country. The random user even said that he/she is a big fan of Vaishnavi from Bigg Boss show which made her/him to think that Vaishnavi is a deserved person to take care of the pet. Check out the screenshot of the proposal here : 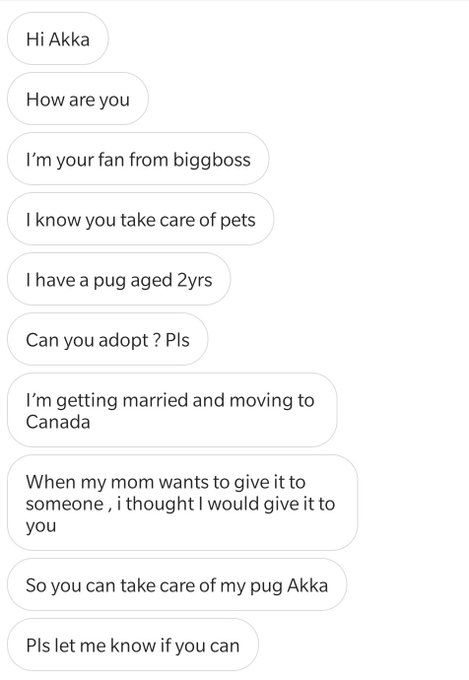 In the captaion of her tweet Vaishnavi wrote “A PET IS NOT SOMETHING YOU BRING IN TO YOUR LIFE AND THEN JUST GIVE AWAY 2 YEARS LATER. THESE KIND OF PEOPLE MAKE ME SO ANGRY.”

A PET IS NOT SOMETHING YOU BRING IN TO YOUR LIFE AND THEN JUST GIVE AWAY 2 YEARS LATER. THESE KIND OF PEOPLE MAKE ME SO ANGRY. pic.twitter.com/YS53EtpJ7K

Here’s some of the Instagram stories posted by Vaishnavi regarding this messages : Vaishnavi, being one of the controversial contestant of the show, managed to stay inside the house for few days. She is also one of the very few contestants who stayed in secret room in Tamil Bigg Boss history.

Vaishnavi Prasath is an Indian Journalist and radio jockey. She is the granddaughter of Saavi’s Sa. Viswanathan, who is a senior journalist and the founder of the magazine Saavi. Vaishnavi is currently a Radio Disk Jockey (Radio DJ) in Chennai FM 104.8 FM. She has formerly worked in Secret Society, Lifetime and Lensational. The 29 aged woman  got married recently to her long time boyfriend. Being one of the active social media users among many Bigg Boss contestants, Vaishnavi has been exposing screenshots of the messages sent by followers for quite a while. Vaishnavi Herself Exposed The Abusive Comments She Received For Wearing Swimsuit !! Check What She Has To Say To Them !!

What do you think on these posts from Vaishnavi Prasad of Bigg Boss ?? Comment your views below !!