Earlier, the trailer of Jayam Ravi starrer “Comali” released few days before and went viral across the Internet despite of having a mediocre plot line which is evident through the trailer cuts. Towards the end, the makers decided to take a sly dig at the political entry of Superstar Rajinikanth. To prove that they are living in 2016, Yogi Babu switches on the TV in which we can see Rajinikanth announcing his political arrival. Jayam Ravi who denies to believe it says that it is 1996. 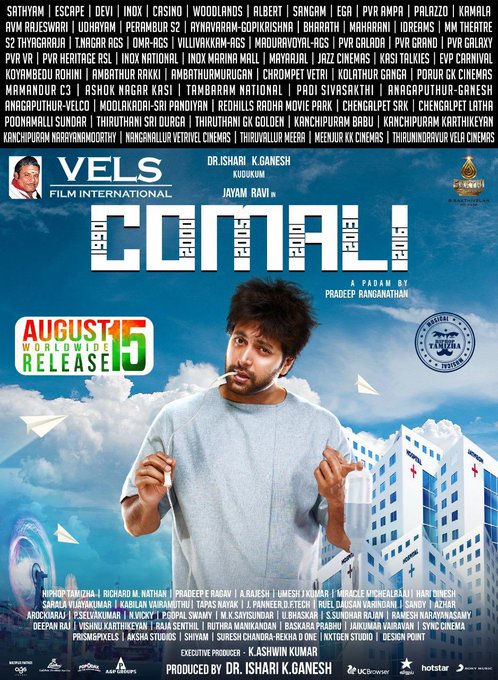 As today , the movie got released, Parthiban’s former assistant director and current associate director Krishnamoorthy alleged that the Comali story belongs to him. Krishnamoorthy provided proofs of writer’s association accepting that the story of Comali is similar to his story.

Krishnamoorthy says that he narrated the story to Parthiban when he joined him as assistant director in 2006. “Through first look and trailer some people informed me that the film is similar to the story I made. When I made some inquiries, I came to know that it is my story. In 2014, I registered this story in writer’s union. I titled the film as 25+25=25.” says Krishnamoorthy in the interview.

At one of point of the interview, frustrated Krishnamoorthy even abused director Pradeep, the director of “Comali”. He even asked Pradeep to do some other business instead of directing films. Director Parthiban produced a letter to make people know when Krishnamoorthy narrated the story to him. On knowing this the producer of Comali asked Krishnamoorthy to narrate a script to produce.

Comali is a 2019 Indian Tamil-language comedy film produced by Vels Film International. Also known by its working title during production, JR24, the film is written and directed by Pradeep Ranganathan in his directorial debut and stars Jayam Ravi, Kajal Aggarwal and Samyuktha Hegde in the lead roles. The film marks the first collaboration between Ravi and Aggarwal, and it marks the second collaboration between Ravi and Hiphop Tamizha, after the 2015 film Thani Oruvan.

What do you think on this allegation of Krishnamoorthy ?? Comment your views below !!