Filmmaker Ram Gopal Varma landed in a trouble by riding triple on a motorbike and posting the video on Twitter, prompting the police to fine him for traffic violation, in Hyderabad on Saturday. 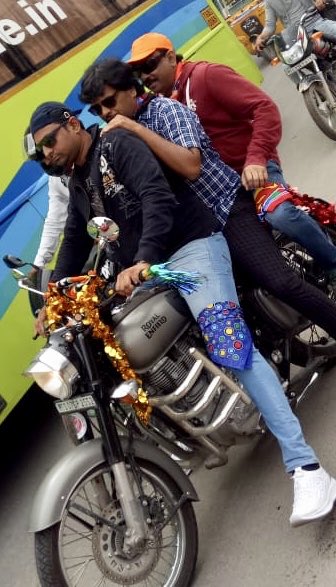 Varma riding pillion along with director Ajay Bhupathi on a Royal Enfield’ driven by another director Agsthya without helmet, reached a theatre in Moosapet to watch Telugu movie ‘Smart Shankar’, directed by Puri Jagannadh. “Am looking like a pick pocket in my getup when I went to see #ismartshankar in Sri Ramulu theatre in Moosapet,” RGV, as Varma is popularly known, tweeted along with video and pictures.

RX 100’s Ajay Bhupathi, Lakshmi’s NTR’s Agasthya and me on a bike triple riding without helmet on our way to see #issmartshankar pic.twitter.com/X2mxfXLZId

He posted another tweet saying “Where is the police? I think they are all inside the theatre watching #ismartshankar.”

The Cyberabad police retweeted with a witty comment. “Thanks @RGVzoomin for reporting Traffic Violations. We expect the same responsibility in actually following the Traffic rules yourself. By the way, why only theaters?, Traffic Police see a lot of drama, circus like below on roads every minute,” the police tweet said tagging the video of Varma and two others on the bike.

Thanks @RGVzoomin for reporting Traffic Violations. We expect the same responsibility in actually following the Traffic rules your self. By the way, why only theaters?, Traffic Police see a lot of drama, circus like below on roads every minute. pic.twitter.com/fCT3FFRQ9b

The police also posted the Rs 1,335 traffic ticket (challan), issued in the name of B. Dilip Kumar, in whose name the two-wheeler is registered, for violations. Check how Ram gopal reacted to it :

😘😘😘😘😍😍😍😍 @cyberabadpolice gaaru, I loveeeee uuuuuuuuu and I want to kiss u non stop for 39 days for the fantaaaaastic work u are doing and if I had a second daughter I would have requested u to be my son in law🙏 https://t.co/LNcU2vsS0e

Earlier, Varma created a stir at iSmart Shankar‘s success party by pouring liquor on himself. In the video posted on Twitter, he is seen hugging Puri Jagannadh and actress Charmi Kaur, co-producers of the movie.

What do you think on his activities ?? Comment your views below !!