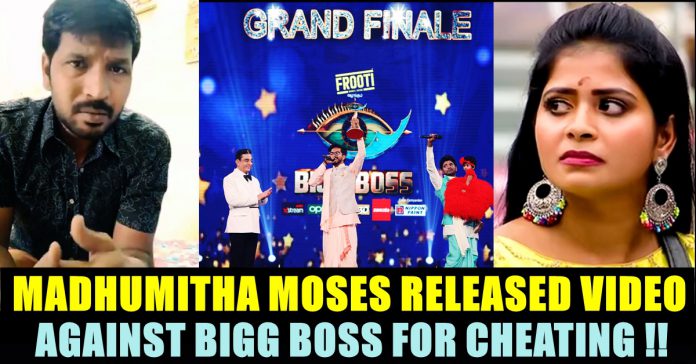 Bigg Boss fame Madhumitha’s husband came up with a shocking allegation against the management for using his footage in the finale episode. Bigg Boss season 3’s grand finale which was hosted by Kamal Haasan was streamed in Television on Sunday from 6 Pm. Mugen, youngest contestant of the show won the title surprisingly. Wishes are pouring from across the world for Mugen as he won the title of Bigg Boss season 3. He broke the stereotype and became the first contestant to win the title after winning ticket to finale task. In previous season, Snehan and Janani failed to hold the trophy after winning ticket to finale.

Unlike other Bigg Boss weekend episodes, the grand finale started streaming from 6 in the evening. Many contestants including Sakshi, Yashika, Kasthuri and Vanitha performed dance in the final stage. In the show which was telecasted, we could see Madhumitha’s husband Moses enjoying the finale performances. A particular shot showed him smiling on seeing Yashika’s stage performance.

Earlier, Moses came up with a tweet saying that he didn’t attend the finale. Now he uploaded a video and asked the Bigg Boss management to provide clarification. “In Bigg Boss finale, none of our family members took part as we were not invited. Now a news is spreading that I have participated in the finals and I got shocked while hearing about it. This is completely wrong and I request a clarification from their side. Thanks” Moses said in the video.

Madhumitha’s husband Moses is voicing out for her since the issue of Madhumitha took place. For the uninitiated, Madhumitha was terminated by Bigg Boss for breaking rules. While terminating her, Bigg Boss said that during an argument between Madhumitha and the housemates after a task, the OK OK actress hurted herself to prove a point she stated. She was immediately terminated with initial treatment.

Check out the few reactions for his video :

If the case filed by Vijaytv is still going on then this footage showing u in finals is a false proof to liquidate your point of defense telling the Court that you are in good terms with Vijaytv.

@Vijaytelevision has committed an huge blunder..It is the black mark in the channel career…They might have earned 100 Crores with #BiggBossTamil3 But they lost their name and Fame.. @MadhumithaMoses those ppl who have not invited you got an slipper shot by posting your video… 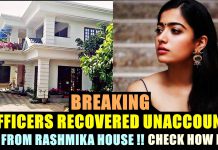 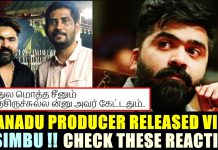 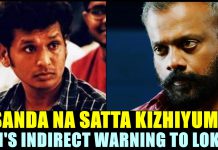